I’m a huge fan of Mira Grant’s Newsflesh series. So, I decided to give her Parasitology series a try. This is a very interesting series. In this world, scientists have genetically modified tapeworms and made them help to medicine, instead of a hindrance. They can be tailored to an individual and help them with issues like epilepsy, like our main character Sally Mitchell. However, you know what happens with you play with Mother Nature. 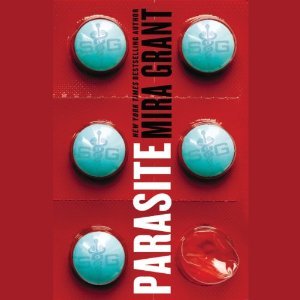 A decade in the future, humanity thrives in the absence of sickness and disease.

We owe our good health to a humble parasite – a genetically engineered tapeworm developed by the pioneering SymboGen Corporation. When implanted, the tapeworm protects us from illness, boosts our immune system – even secretes designer drugs. It’s been successful beyond the scientists’ wildest dreams. Now, years on, almost every human being has a SymboGen tapeworm living within them.

But these parasites are getting restless. They want their own lives…and will do anything to get them.

In this book, we meet Sal. She was born Sally Mitchell. That is until she gets into a car wreck and goes into a coma for a long while. When she wakes up, she is completely different. She asks to be called Sal and has to go through a lot of occupational therapy, learning the basics of walking, talking and dressing herself.

By the end of this book, things have already started to take a turn for the worse. People are turning into “Sleepwalkers”. They act exactly what it sounds like. They walk around like they are asleep, but they also have a fierce appetite. They try to eat you. So, in a way this is almost like a zombie story, but yet not.

Sal and her boyfriend, Nathan, go on a search to learn more. Sal gets a note that quotes a book from Nathan’s childhood. This is a story that is mentioned throughout the series. It talks about going through the broken doors and not being able to unlearn what you’ve learned. 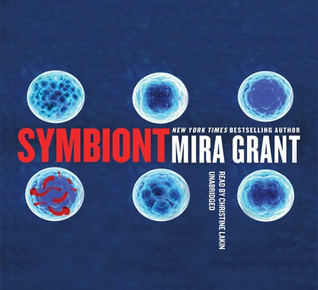 THE ENEMY IS INSIDE US.

The SymboGen designed tapeworms were created to relieve humanity of disease and sickness. But the implants in the majority of the world’s population began attacking their hosts turning them into a ravenous horde.

Now those who do not appear to be afflicted are being gathered for quarantine as panic spreads, but Sal and her companions must discover how the tapeworms are taking over their hosts, what their eventual goal is, and how they can be stopped.

In this story, we continue to learn more about what is going on with Sal and the others in this world. The government is starting to employ military tactics to protect Americans. People are starting to be rounded up and secured while the sleepwalkers are being disposed of.

We learn more about what is going on, but at the same time, more questions are coming up. Things happen leaving some characters in peril. Not sure where things are going to go from here. Luckily, I was able to jump into third book not long after finishing this one. 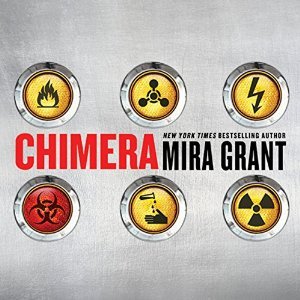 The outbreak has spread, tearing apart the foundations of society, as implanted tapeworms have turned their human hosts into a seemingly mindless mob.

Sal and her family are trapped between bad and worse and must find a way to compromise between the two sides of their nature before the battle becomes large enough to destroy humanity and everything that humanity has built…including the chimera.

The broken doors are closing. Can Sal make it home?

At this point, we have a good handle of what is going on, sciencewise anyway. What is going to happen to the characters we’ve grown to love is another thing. The bad people are not always obvious. Who is going to come out on top? Will humans live through this disaster?

While, I really enjoyed this series, it doesn’t compare to the Newsflesh series, in my opinion (that is not a putdown for this series, just shows my love of Newsflesh). What does make this story great is Mira Grant’s ability to write characters that you truly care about. Not only was I highly invested in the main character of Sal, but also in many of the secondary characters. Tansy is a character that is a little off kilter, but an amazing character. She is extremely loyal to those she has as her family, but she really doesn’t have a conscience outside of them. She has no problem killing you if you try to hurt her family. Adam is childlike, but also much smarter than a child in other ways. Very smart, but emotionally a young child. Fishy, who thinks he’s living in a videogame, is fearless. I mean, if he gets killed, he can just use another life from the game. He is someone I would like to have at my back anyday. Dr. Cale is a real interesting character. She was instrumental in creating these worms, but she also saw what was going on well before anyone else. Her partner, Dr. Banks, chose greed over caution, so she left and been underground ever since. But, at the same time, Dr. Cale will do just about anything to learn more. She is all about knowledge. Sherman is one of the scariest guys, though he doesn’t always seem that way. He’s able to charm his way into anything. If you’re a character driven reader, like me, I can’t recommend Mira Grant enough.

Narration
Christine Lakin was a new-to-me narrator before starting this series. She did an amazing job with the narration of this series. Her voices and tone were perfect for each of the characters. She really brought out Sherman’s charm, Fishy’s crazy, Adam’s childishness. I loved her voice for Tansy and her crazy. I really enjoyed her narration and will be looking for her in the future.