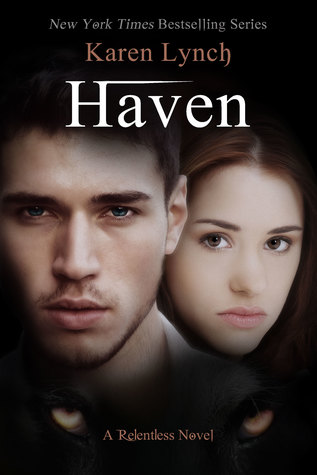 Things are going well for Roland Greene. High school is behind him, he has a sweet new ride, a good job, and he’s making plans for his future. At eighteen, he’s one of the strongest werewolves in his pack, and he already has more vampire kills than most wolves have in a lifetime. Life is good. Almost.

It’s time for the annual pack gathering. Wolves from all over Maine come to take care of pack business and socialize – and to find mates. Everywhere Roland turns there are unmated females, and as the Alpha’s nephew, he’s prime mate material. The last thing he wants right now is a mate, and he’ll do all he can to stay a free wolf.

Until he meets her.

** This book is considered Upper YA due to some mature content.

Karen Lynch can write, and write really well. Her series, Relentless, snuck up on me with the first book and gave me a series that I have absolutely loved. One that is full of all sorts of supernatural creatures, action, suspense, world building, and slow burn romance. I had no idea what I was getting into with that first book(which was free, by the way), but I have totally enjoyed the ride, no matter how rough it was a times.

The focus of the first four books were about Sara and the immortal warrior Nikolas, who not only loved her, but fought along side her eventually. They were (higher end age)young adult books and told the story of a race of immortal warriors named Mohiri, and bred to be vampire hunters. Throughout those books, Sara’s closest friends were Roland and Pete, even though she didn’t know for a long time they were werewolves. Now that Sara’s story is pretty much complete(although she does show up in phone calls), Roland gets his book. Emily, one of only two vampires that have been saved and made human again(long story)has come to Maine to start a quiet life of her own in Sara’s old apartment. Of course, she meets Roland and Pete. Werewolves and vampires are mortal enemies in Lynch’s world building, so she definitely doesn’t want Roland and Pete to know what she used to be.

I loved Roland and Pete as characters from the minute they showed up in the first book. Roland especially. He’s super strong, both in mind and body-meaning he has some alpha tendencies at times. At nineteen, that doesn’t mean a whole lot though. What’s bothering him now is the pack gathering in his home territory. And all the unmated females that come along with it. The one thing he doesn’t want is a mate. He’s got dreams of what he wants for his life and a mate doesn’t fit. Emily is completely different from Roland. Where he is outgoing and popular, Emily is quiet and initially withdrawn. She suffers from nightmares and is an artist. I liked both of them as main characters, although Roland was a clear favorite for me.

Whereas the first four books were basically urban fantasy with a romance, this one I would consider paranormal romance. There is, of course, a villain or two and there is some violence and action as well. But this book to me is all about Emily and Roland. Roland as a hero is not a stretch. He’s young(nineteen), but in werewolf culture, they mate after eighteen and the younger the better to have babies. Just some of that good world building.

I think there will be another book or maybe two, because I can think of at least two characters that I would like to see get their book-unless the two end up together? Jordan and Chis have been featured in all the books, as well. I enjoyed my time with the Maine wolf pack, but I will be happy to get back into the Mohiri world with the next books. Since this book borders pretty much on new adult, I would highly recommend it to ages,16 plus or higher depending on maturity level, due to sexual situations, violence, and some language.