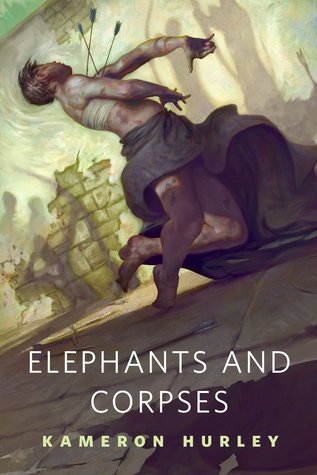 The corpse-jumping body mercenary Nev is used to filling other people's shoes. When his assistant Tera recognizes the most recent waterlogged cadaver they bought off the street, though, he finds that his new body is carrying more trouble than he bargained for.

Nev is a body mercenary, a kind of necromancer who actually inhabits the bodies he reanimates. And he doesn’t just reanimate them, he truly brings them back to life. The body. Not the (spirit of the) deceased. And he seems to revive them into better shape than they had ever been in their original incarnation.

Normally I would hate this kind of story, b/c while I hate all Dead Things, this type of scenario is what I hate the most of all the Dead Things.

This was the second time I’d read ELEPHANTS AND CORPSES, and my love for it remains unchanged.

We don’t know how old Nev is, b/c as long as there are corpses nearby, a body merc will never die, but we know that he’s significantly older than his fifty-one-year-old body manager, Tera.

You: What’s a body manager? o.O

Me: I had the exact same thought.

Body mercs apparently keep a stable of corpses, both for versatility (they are mercs after all) and for self-preservation. A body manager . . . helps maintain the collection. I think.

It’s a twenty-five page story, there’s only so much world-building, etc.

But more importantly, they also help their merc retain their humanity.

When all your human connections are long dead, and you primarily deal in death, you can become . . . detached.

And Hurley conceys all of this, while dropping you into the middle of a crisis, and punching you right in the FEELS several times over. It took a page or two to adjust to the grossness of the concept, but the gross was quickly overwhelmed by the urgency that then somehow managed to spiral into heart-clinching introspection on what it means to be alive.

All in a few short pages. *tips hat*

You can read it for FREE here:

2 responses to “Review: Elephants and Corpses by Kameron Hurley”