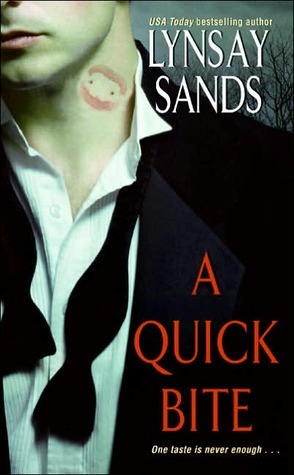 Lissianna has been spending her centuries pining for Mr. Right, not just a quick snack, and this sexy guy she finds in her bed looks like he might be a candidate. But there's another, more pressing issue: her tendency to faint at the sight of blood . . . an especially annoying quirk for a vampire. Of course it doesn't hurt that this man has a delicious-looking neck. What kind of cold-blooded vampire woman could resist a bite of that?

Dr. Gregory Hewitt recovers from the shock of waking up in a stranger's bedroom pretty quickly—once he sees a gorgeous woman about to treat him to a wild night of passion. But is it possible for the good doctor to find true love with a vampire vixen, or will he be just a good meal? That's a question Dr. Greg might be willing to sink his teeth into . . . if he can just get Lissianna to bite.

Normally I would say that this is the first book in this very long series. Yes, it’s numbered as one, but from my understanding, the author went back and wrote this farther into the series, although I have no idea how far in she was when she wrote it. I guess that means when I read book 2 first, out of order(I thought), I was really reading the first one that came out? Confusing yes, but it doesn’t even matter as I think any of these can be read as a standalone if need be.

Greg Hewitt is working late at his office where he is a psychologist. When he leaves, he finds himself climbing into the trunk of a car even though all he is thinking about is his upcoming vacation. Quite the beginning! Lissianna Argeneau arrives at her mothers home for her birthday party and makes a quick stop in her old bedroom. There she finds her birthday present tied to her bed. And that is a very abbreviated version of how the hero and heroine of this book meet.

Lissianna is part of the huge Argeneau family of vampires, based in Toronto. She’s smart, caring, and a good person. She is a social worker for a homeless shelter and really cares for the people there. She’s actually very human with the exception of what makes her a vampire. She is a born vampire and has never been dead. There’s actually a very creative back story for these vampires and how they came to be. These aren’t your normal bloodthirsty devils or even the glittery kind. At over two hundred years old, she still looks to be about twenty five. Greg is pretty much a workaholic and hasn’t taken a vacation in years. He’s around thirty five, handsome, and very intelligent. Lissianna and Greg are immediately attracted to each other, although I still am not sure why Greg isn’t fighting desperately to get out of the house. Compelled? Yes, but with a strong mind that they can’t keep under control. There is actually a huge cast of characters besides these two. It’s a house party weekend for Lissianna’s birthday, so we meet a lot of the Argeneau family in this book. My favorite of all was Lissianna’s cousin Thomas, probably her closest friend and fellow conspirator in all things fun. If I can find a book with him as a main character, it will probably be my next read in this series. As with any of these books that I have previously read, there is of course, a villain. And I am going to leave it at that.

This was a good romance with a bit of a mystery that morphed into a thriller at times. But most of all, this was just a fun read. There’s humor, good characters, and a bit of steamy romance. As with the previous books, I really enjoyed the world building as well. Did it have a deep intricate plot? Not so much, and that was perfectly alright. I have thoroughly enjoyed myself with every one of these reads and this book was no exception. I could however, tell the difference from this book and the latest of her books that I have read. I think the series has definitely gotten better as it progressed. The recent books are really exciting, almost thriller reads, and this one was a bit more sedate. There is a place for both kinds of reads in a series that is this long, at least I think so.

Highly recommended to adult paranormal romance readers. Don’t let the sheer number of these books keep you from reading this series, because you can pretty much start anywhere and keep up easily. A Quick Bite equaled a quick, easy, and fun read for me.