THE CROSSBREED SERIES compelling urban fantasy romance series following a private organization of individuals who hunt evildoers. Dark secrets, complex characters, and plenty of action. If you like a slow-building romance with magic and adventure, look no further.

Raven Black will win your heart, and Christian Poe will break it.

Christian slipped on his thin cotton shirt, and I kept waiting for that towel to drop from all his twisty movements, but it clung to him like a chastity belt to a virgin.

Only there was nothing virginal in the way he looked at me. His eyes burned with secrets, and when he licked his lips, I felt the invitation just as surely as I saw it.

He tossed me my jacket, and I stood up to put it on. Christian did the same, his long black jacket swirling around him as he slipped his arms into the sleeves, until finally it covered everything but his legs below the thigh.
Then the towel dropped.

Christian swaggered back to the bathroom. Did he just chuckle?
Perturbed, I looked away and widened my eyes when I realized my bra was draped over the TV. I stuffed it into my coat pocket and then switched off the television.

As I neared the bathroom entrance, I peeked in and saw him leaning over the tub, his foot propped on the edge while he tied his laces.

“You look like something the cat dragged in,” he said, peering over his shoulder.

“If you were a gentleman, I might have gotten to use the shower first.”

He stood up and gripped the doorjamb over his head. “Perhaps next time we should share—that way nobody gets left out.”

Christian winked. “Just trying to think about the environment and water conservation.”

“Exactly what did you say to that woman at the bar that made her a willing victim?”

He grinned wolfishly. “I’m afraid you’ll have to come closer to find out.”

“No, thanks. I’m just curious what kind of words of seduction you use to catch your prey. Probably telling them they taste like the Dead Sea or something romantic like that.”

Christian gave me a bemused look. “Why would you say something like that?”

I shrugged. “I don’t know. It was the first thing that popped into my mind. Am I getting warm, Romeo?”

“Ice cold. Like your nipples. Perhaps you should get decent and put on a bra.”

“If a bra makes you decent, then you need one more than I do.” Dannika Dark is the USA Today Bestselling Author of Urban Fantasy Romance and Paranormal Romance. Her books have sold more than 1 million copies worldwide, and she is a 2016 Audie Awards finalist.

Dannika was born on a military base in the U.S. and spent her youth traveling abroad. She developed an interest writing poetry and song lyrics early on, eventually gravitating toward a job that involved writing procedural training documentation. In her spare time, she wrote novels before she decided to pursue a career in publishing.

In addition to writing about supernatural worlds, Dannika is passionate about graphic design and creates all her own covers and series art. When not writing, she enjoys indie music, movies, reading, Tex-Mex, strawberry daiquiris, heaps of chocolate, and unleashing her dark side.

All of her published books to date are written in the same universe and contain material suitable for adults only.

"For me, writing is all about blending genres to break out of the confines of predictability, but it's what I love to do." ~ Danni 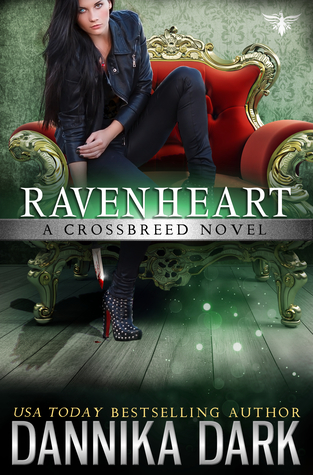 Two weeks after joining Keystone, Raven Black is ready to take on the world as a criminal hunter for hire. If only her partner wasn’t a bloodsucking Vampire with a penchant for getting under her skin. Despite her lavish surroundings, Raven misses the freedom of life without rules. And Keystone’s next assignment is about to test her self-control in more ways than one.

Dead bodies are popping up in the human district, and all signs point to a Breed serial killer. In order to catch him, Raven and Christian embark on a mission that takes their partnership into uncharted waters. Lives are at stake. Can Raven trust her instincts, or will she fall into a web spun from lies and deceit?

Time is running out in this pulse-pounding tale of dark secrets, murder, and forbidden desires.

Well, she did it to me again. Dannika Dark remains the only author to give me cold chills while reading. Not only once this time, but twice. If you are a Mageri(her first series)fan, than you will understand completely after reading this more than worthy addition to her Cross-Breed series.

Raven, a cross-breed of both vampire and Mage, is still settling into her new role of working with a group named Keystone against Breed wrong doers. She’s been working against evil Breed members for years, but now she has backup and gets paid for it. Breed, otherwise known as anyone that is of the supernatural persuasion, are numerous in Cognito, making it the perfect place for the members of Keystone to thrive. This time around a serial killer vampire is at work in Cognito, draining women’s bodies of blood and leaving them out in the open to be found. Christian, formerly of the Mageri Series, is Raven’s partner and a vampire. He also kind of has a thing for her, but that goes against every rule at Keystone. Don’t get me wrong, this is not a paranormal romance, it’s urban fantasy all the way-so far anyway. However, that doesn’t mean that there’s not a spark there between the two. Other members of Keystone got even more fleshed out by Dark this time. Favorites, aside from Raven and Christian, were Gem, a roller skating adult Mage that doesn’t want to grow up, Niko, a blind Asian master of weapons and interpreter of energy that he can “see”, and Wyatt, a master computer hacker and gamer, with an ability to both interact with ghosts, and have them follow him home. Finishing out the group is Blue, a beautiful eagle shifter, Shepherd, a Sensor with a chip on his shoulder and scars covering his body, and Viktor, the Russian leader of Keystone, who also happens to be a wolf shifter.

It didn’t take me long to get invested in this series, but then it never does when I read one of Dark’s books. Raven as a character intrigued me from the beginning. A vampire and a Mage? How does that even happen? We do get more answers, especially concerning her vampire side, but I still want to know more about her Mage side. And I have always been intrigued by Christian. He’s enigmatic at his core, but is also honorable in his own way-although not when it comes to the ladies that flock around him-for the most part. The banter between Christian and Raven was both humorous and at times compelling; on the same note, the fun banter of the other characters kept this book from being completely dark due to the serial killer subject matter.

A mystery, thriller, and at times humorous read, this book also was about the wonderful characters that inhabit this part of Dark’s Breed world. If you enjoy a book that is story driven while verging a bit on the side of character driven, than this might be perfect for you. Dark’s writing was impeccable as is her usual, her characters were intricately depicted, and the mystery was good. The action had me on the edge of my seat and when I was done reading, the author still was able to give me a cold chill moment. So amazing.

I highly recommend this book(and of course the previous one)to adult urban fantasy fans, and paranormal readers that love a great read would enjoy this series as well. I received a copy of this book from the author in exchange for a fair and honest review.

Are you an Enchantress Design & Promo Tour Partner? Consider joining the team to participate in blog tours and events that provide you with exclusive content and the ability to connect with the authors you love and enjoy to read! We provide our tour host with the HTML code that is simple and easy to personalize regardless of which webhost you have! We share opportunities for not only other authors and companies, but learning and developments as well!