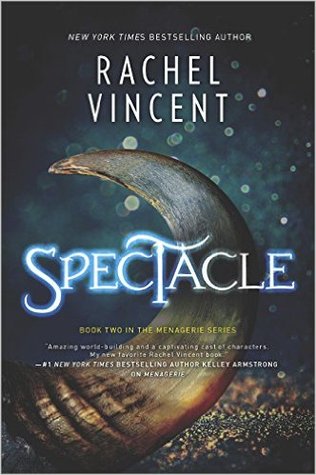 In this riveting sequel to New York Times bestselling author Rachel Vincent's acclaimed novel Menagerie, Delilah Marlow will discover that there is no crueler cage than the confines of the human mind…

When their coup of Metzger's Menagerie is discovered, Delilah and her fellow cryptids find their newly won freedom brutally stripped away as they are sold into The Savage Spectacle, a private collection of "exotic wildlife." Specializing in ruthless cryptid cage matches, safari-style creature hunts and living party favors, the Spectacle's owner, Willem Vandekamp, caters to the forbidden fetishes of the wealthy and powerful. At the Spectacle, any wish can be granted—for the right price.

But Vandekamp's closely guarded client list isn't the only secret being kept at the Spectacle. Beneath the beauty and brutality of life in the collection lie much darker truths, and no one is more determined than Delilah to strip the masks from the human monsters and drag all dark things into the light.

Delilah and the other cryptids of Metzger’s Menagerie are recaptured after their all too brief taste of freedom at the end of the last book. Originally, I’d thought that Rachel Vincent was going to take a completely different route in this sequel, but instead SPECTACLE showed us that not all cages have bars. The writing in this series is as exquisite as the horrors are abhorrent, and it’s this unlikely combination that makes the story so enthralling.

On the outside, the Savage Spectacle appears to be a relatively humane way of running a freak show, or at least as close as one can come with regards to the barbaric practice of keeping society’s cast outs incarcerated for monetary gain. The occupants have mats to sleep on, healthy food to eat, and their basic personal hygiene requirements are met. However, a prison is still a prison, no matter how shiny it is, and the fact remains that the inhabitants are being held against their will.

Vandekamp has set out to revolutionize the way that cryptids are kept with collars that can shock, paralyze, mute, and call their gifts. So, as uncivilized as their previous accommodations were at least the captives could still scream and fight. The owner has also come up with a bunch of different uses for his new technology including work detail, death matches, sport hunting, and engagements. The first three are pretty self-explanatory, but the last basically means that any detainee is available for hire, and as you can imagine, anything goes because cash is king.

The plot is once again driven by the need to survive, except in this installment the focus is on the mind instead of the body. It’s one thing to physically beat someone into submission, and quite another to literally take away their free will. The author’s insights into the human psyche are truly haunting in their realism, and will make you side with the monsters much like Anne Bishop did with her THE OTHERS series. Vincent concludes this novel with yet another missile that’ll see the MENAGERIE trilogy drastically shift directions one last time for the finale to Delilah’s tale.

Just when I thought that the Speculative Fiction genre has nothing left to give—BOOM—here’s SPECTACLE!