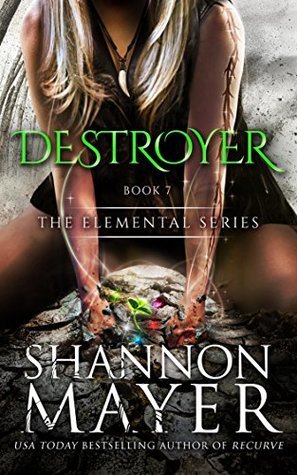 Time is not something we have. The world is coming apart at the seams as the humans rain down destruction upon their own kind and the supernatural world. The false mother goddess is hunting down the most powerful elementals to take the last of their power, and through it all, the secrets of who I truly am begin to spill upward.

I must find the strength to stop the mother goddess, and to save our world, but which aspect of my heart will hold me up and what will it cost me in the end?

As the title suggests, Shannon Mayer wreaks havoc on her ELEMENTAL universe in DESTROYER, the final installment. Characters die, the world is laid to waste, and the truths exposed rock Lark to her very core. There is no happily-ever-after, not for everyone at least, but life always finds a way to prevail, so there is hope for the few left standing because every ending is also a chance to start again.

The pacing took a beating in the first quarter of this book because there were too many threads that needed to be dealt with prior to moving forward with the actual story. The conclusion to a series is where an author’s approach to writing becomes obvious—are they a plotter or a panser? Mayer is a bit of both, so although the opening chapters left something to be desired, the later ones were all about the long game.

Lark finds herself allied with two antagonists, and discovers that there’s more to Cassava. The heroine’s entire existence has been one big chess match building towards a moment in time, and check is about to be called. The protagonist is of course outraged, and does regain control of her destiny to a certain extent, but ultimately when you’re out on a ledge, and the only thing left to do is jump… Can that really be called a choice?

The origin of Elementals is revealed, and it made a whole lot of sense. I felt that the resolution was too easy in some respects however, the price was steep, so it kind of evened out. I liked that we caught glimpses of most of the secondaries, and that Peta played an integral part in the outcome, but seeing how this novel is the last of this series + two other, an epilogue would have been nice, especially for Alex & Pam’s sake.

DESTROYER will play pinball with your emotions, and leave you raw.

One response to “Review: Destroyer by Shannon Mayer (@TheShannonMayer, @HiJinksInk)”