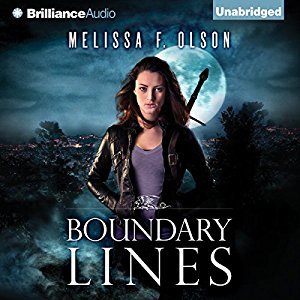 Fitting into the Old World isn’t going very well for Boulder boundary witch Allison “Lex” Luther: she may have earned a place in a vampire’s service, but now it seems as if every supernatural creature in town has found a reason to hate her. And when Lex and her partner are assigned to investigate the suspicious disappearance of two vampires during the night of the full moon, they find themselves with more questions than answers.

The crusade for answers will lead Lex all over the Colorado Old World, from a prison cell for a broken werewolf to a haunted Denver brothel. And when Lex determines the responsible party, the hunt is just beginning: something has been awakened in Boulder, something as old and powerful as it is terrifying. Only the woman with death in her blood can stop what’s coming.

So far, the Boundary Magic trilogy has been a very entertaining listen for me. I’ve not read a lot of witch books, but the type of witch that the main character is was a new one for me. Very unique.

Lex is a boundary witch, a war veteran, and a wonderful aunt to her deceased twin sister’s baby girl. She’s also working for the head vampire of Colorado and seeing where things go as far as a relationship with Quinn, a vampire she partners with. It’s Halloween night when Lex realizes that members of the supernatural community of Boulder are acting a bit(or a lot) “off”. Things that shouldn’t happen, are happening. Witches are all high strung and wired up. Werewolves are coming into places that are forbidden to them. Ghosts are not only showing up, but are able to be seen and heard clearly in some instances. Vampires are partaking in blood in an open environment among humans. And an ancient evil is unearthed-literally-and is now eating humans. Nerd(but handsome) witch Simon and his sister Lily also feature prominently.

I am finding these books to be really fun. They are not comedy, but there is some humor, some really great characters, and a creative premise. The villain(ancient evil) this time was really unique and nicely fleshed out by the author. Of course, there is also more than one villain for Lex to come up against. I enjoyed a really fun scene between Lex and a ghost of a madame from a bordello of the past. Actually there were several fun scenes with other supernatural characters, the werewolves become helpers at one point, and another rare kind of witch is brought into the fray. But none of the other witches are as rare as Lex. She’s known as a death witch of sorts. She can bring back someone that is dying or has just died, and can cause the death just as easily. She’s still learning her powers, but at least she didn’t kill all the fish in a pond this time. The best part is that she can’t really die. If so, she would never have made it out of childhood after drowning. Of course, beheading would do the trick.

Narration? I am enjoying listening to this series, although I also own the eBooks. Kate Rudd narrated all three books and I can’t imagine anyone better for this character. She deftly handled both the female voices and did really well with the male voices. I really appreciate a narrator that can do male voices without me being taken out of the story by a really bad effort. So I was really happy with this narrator and wouldn’t hesitate to listen to anything else she narrates. Narration for me was 5 stars out of 5.

I would classify this as urban fantasy, although she is having a relationship with Quinn that is still new. Things did heat up for them in this installment, some details, but nothing explicit. And that was fine with me. More explicit wouldn’t have bothered me either, so either way it was good. Lots of action also contributed to this story and kept me on the edge of my seat at times while reading.

Highly recommended to urban fantasy readers and paranormal romance fans would probably enjoy this as well.