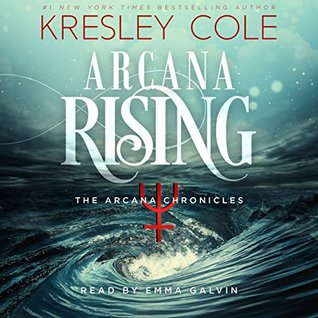 When the battle is done . . .
The Emperor unleashes hell and annihilates an army, jeopardizing the future of mankind--but Circe strikes back. The epic clash between them devastates the Arcana world and nearly kills Evie, separating her from her allies.

And all hope is lost . . .
With Aric missing and no sign that Jack and Selena escaped Richter's reach, Evie turns more and more to the darkness lurking inside her. Two Arcana emerge as game changers: one who could be her salvation, the other her worst nightmare.

Vengeance becomes everything.
To take on Richter, Evie must reunite with Death and mend their broken bond. But as she learns more about her role in the future--and her chilling past--will she become a monster like the Emperor? Or can Evie and her allies rise up from Richter's ashes, stronger than ever before?

When I heard the news that the ARCANA CHRONICLES were going to stretch two books longer than originally planned I feared that Kresley Cole’s sensational Young Adult trilogy was going to lose some of its shine. Listening to ARCANA RISING cured any doubts that I may have had about the author’s ability to prolong Evie Greene’s story while maintaining the same caliber of writing that I’ve come to expect from this series.

DEAD OF WINTER left fans in the lurch over many things, but rest assured that the main one doesn’t remain a mystery for long. Now that that’s out of the way, I really enjoyed how this installment broadened the scope of this dystopian world. Baggers serve a purpose other than killing, the Major Arcana aren’t the only cards in the deck, and Evangeline finally gets her hands on the knowledge of all the Empresses who came before her.

Anyone who’s on Team Death will be pleased with this novel, I know I was. Sol (the Sun) proves to be a perplexing secondary while as Matthew (the Fool) further demonstrates why in spite of his mad ramblings that he shouldn’t be overlooked as a serious contender to win it all. True to form, Cole tops it all off with a fourth cliff hanger by leaving yet another character’s future up in the air in the worst kind of way.

Emma Galvin’s performance remains flawless. It’s impossible to improve on perfection, so if she keeps on doing what she’s been doing, I’ll continue to purchase any audiobooks where she’s listed as the narrator. It was worth waiting an extra 1.5 months for this title to be released in audio instead of one-clicking it the moment it became available to read. I hope I’ll be strong enough to do the same for the finale.

Not all series benefit from extra volumes, but ARCANA RISING was just as good as the first three.