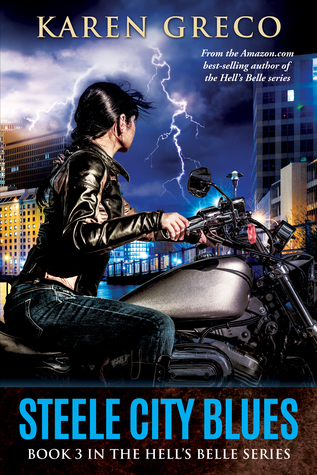 Blood Ops leader Dr. O is chained in the bowels of Steele City, the state’s maximum security prison, and the clock is ticking for Nina and Frankie to bust him out.

Now that supernatural creatures are out of the closet, Providence is descending into an apocalyptic wasteland. With the abrupt shut down Blood Ops, Nina and Frankie are forced to rely on questionable allies to battle Leila, a powerful witch/vampire hybrid hell bent on creating an indestructible supernatural army. She also happens to be Nina’s mom.

Alliances are tested and relationships fractured as Nina and her band of supernatural crime fighting misfits are pushed to the breaking point.

Steele City Blues, the third book in the Hell’s Belle urban fantasy series, is high-octane, action-packed, cinematic story by Karen Greco that fans of The Hollows and the Cassandra Palmer series will love. Join the adventure!


Third in the The Hell’s Bells series, this book proved to me that the series is still going strong. I was late reading this only because I was unaware of its release, so I was glad I found it on Net Galley. My thanks to them for providing a copy to me in exchange for a fair and honest review. Keep in mind that if you haven’t read the previous books, this review does include some spoilers.

When the prologue to a book immediately pulls you in, even if it really doesn’t have much to do with the actual book, you know you have a winner. It was like a short story on it’s own and shows what the two main characters do for a living quite nicely. Lots of action and violence right off the bat. Vampire-witch hybrid(and still developing witch powers)Nina, and her best friend (would be boyfriend?)Frankie work for Blood Ops, a supernatural policing agency. Although now that things in Rhode Island have gone downhill in a pretty spectacular way, Blood Ops has kind of gone along the wayside. Nina’s mother, a very powerful witch, has pretty much taken over Providence and is using Steele City Prison as her headquarters. She has kidnapped werewolves and witches and is experimenting on them. The borders of Rhode Island are closed due to all of this, giving this book a kind of dystopian vibe at times. The U.S. government is involved and have missiles already pointed at Rhode Island and will be used, unless Nina, Frankie, and her various other supernatural friends can find a way to stop her mother. No love lost between her and her mother for sure!

Nina is a snarky, kick butt heroine who is now having a hard time handling her new witch powers. After the death of her aunt(and mother figure)at the hands of her mother, she has no one to help her learn. Well she does have Casper(fun nickname!)the ghost that jumps in and out of her mind at will. Casper was a young witch(eighteenish?)when he died and now only Nina is aware of him. So he stays around and has become one of my favorite of all the characters. Frankie is British, centuries old, and outranks Nina in Blood Ops. He’s very handsome and has recently been changed by the demon mayor of town to be able to go out in sunlight. Frankie has been my favorite character from the minute he was introduced in book one. He might be Nina’s best friend, but he definitely is in love with her. The two of them have major chemistry, but Nina is still friend zoning him as this book begins. An ex-love interest, Max, is still around and still a berserker due to being changed from human by the demon mayor. Berserkers are pretty easily riled, so he was the cause for some of the upset in this book at times. Several new characters are introduced as well, and I’m not telling if they are good or bad. Besides the prison, a good bit of the action takes place in the bar that Nina owns. It’s for supernatural creatures, and has its share of regulars that also fill out the cast of characters of this book.

As usual, this was a fun and exciting read and a good all around urban fantasy. There is some romance, but this is definitely not paranormal romance. Plenty of action and near death experiences for the characters kept me reading and the romance was just the icing on the cake for me. My one problem was that the book slowed down a bit for me closer to the beginning so it took me longer to read than normal for this series and me. Other than that, I enjoyed this read, and highly recommend this series to adult urban fantasy fans.