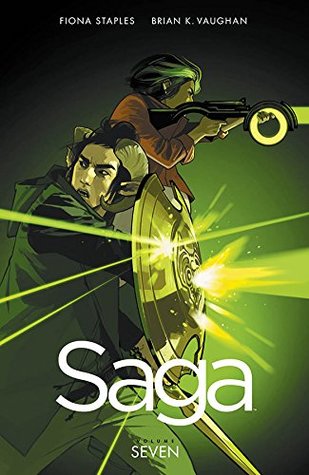 From the worldwide bestselling team of FIONA STAPLES and BRIAN K. VAUGHAN, “The War for Phang” is an epic, self-contained SAGA event! Finally reunited with her ever-expanding family, Hazel travels to a war-torn comet that Wreath and Landfall have been battling over for ages. New friendships are forged and others are lost forever in this action-packed volume about families, combat, and the refugee experience.

2016 was the year of the graphic novel for me—between Fables and Monstress, I was well and truly hooked, but it was Brian K. Vaughan’s SAGA that blew my mind and showed me that, similar to (good) poetry, graphic novels could pack all the insights and feelings of a first person POV full-length novel into a third of the pages and an even smaller fraction of the words. So I’ve been looking forward to Volume 7 ever since I binge read 1 – 6 last July.

I’m actually pretty proud of myself for waiting for the last six individual installments to be bundled together instead of snacking on the smaller episodes each month. I wasn’t sure I could do it, but I’m glad I did, b/c combined they pack one hell of punch. I started taking screenshots after the third time, which, incidentally, was less than halfway through it, to keep track.

It wasn’t just a heart-pummeling either. Vaughan likes to do this thing that most people would call foreshadowing, but that’s kind of like saying Karen Marie Moning likes to end her books with cliffhangers (a gross understatement).

If you’re familiar with SAGA, I’m sure you remember that bomb Hazel dropped about her parents however many volumes ago it was. This time it wasn’t quite that bad—my chest didn’t feel like there was a gaping void where my heart used to be—but the sense of impending doom made me feel like that bird that panicked and took flight in BAMBI.

There was also a horribly awkward plot thread involving Sir Robot and his amorous feelings for Alana. #grossman Now would be a good time to mention the adult nature of this series. There’s an ambiguity to SAGA’s designation as a “graphic novel” that is not for the faint of heart.

I’m fairly vocal about my dislike of being crass or vulgar out of lack of creativity and/or for the shock factor, and I don’t feel that’s what’s happening here. Is it still uncomfortable at times? Definitely. But that’s kind of the point. LIFE is uncomfortable, and at its roots, SAGA is about life. As for how it ended, well, you’ll just have to experience that for yourself, and as is always the case with an ongoing series, there are several big unanswered questions, like:

What the hell was in that box?

And something about the context surrounding Marko and Petri’s argument over who should go after Izabel made me think ze wasn’t referring to either hir criminal status or hir transgenderness when Marko voiced his concern about hir being recognized. Or maybe I’m reading into things b/c we know virtually nothing about hir past. *shrugs awkwardly*

Regardless, Volume 7 of SAGA does not disappoint, and it continues to be the very best of what graphic novels have to offer, IMO. Highly recommended to the WHOLE (adult) WORLD.