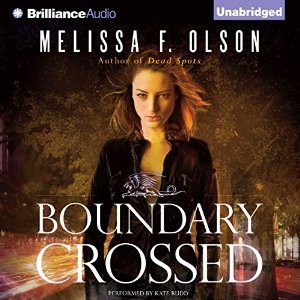 After her twin sister's brutal death, former US Army Sergeant Allison "Lex" Luther vowed to protect her niece, Charlie, from every possible danger. Then when two vampires attempted to kidnap the child, it quickly turned into a fight to the death - Lex's death, that is.

Lex wakes up to two shocking discoveries: she has somehow survived the fight; and baby Charlie is a "null," gifted with the ability to weaken supernatural forces...and a target for evil creatures who want to control that power. Determined to guarantee a safe future for Charlie, Lex makes a deal with the local coven. She sets out with the dashing - and undead - Detective Quinn to track down who's responsible for the kidnapping, sharpening her magic skills along the way. But the closer she gets to the truth, the more dangerous her powers become, threatening to destroy everything - including herself.

Boundary Crossed is a dark, thrilling glimpse into a magical world that will leave readers spellbound.

When a book starts with “The third time I died was early on a Monday morning, a week after Labor Day,” you can believe I was intrigued. I read and enjoyed Dead Spots by this author about three years ago, and for whatever reason, never went on with the series. I even have other books by this author in my tbr pile. When I saw all three books of this series on sale recently, I bought them in both e-reader form and audio form for a very reasonable price. I pretty much jumped right in and ended up very happy that I had bought them.

Lex Luther(yep, that’s correct)is working in a store, when a couple with a baby comes in for diapers. When she approaches them to help, she realizes that the baby they have is her niece. What follows is a fight for her niece, only these people have special abilities. Lex is ex-military and knows how to fight, but these creatures aren’t human. What follows is a story about Lex and her introduction into the supernatural world she knew nothing about. Or that she has powers of her own. As she is adopted, along with her now deceased twin, no one knows her genetics or history. She’s strong minded, and strong in body due to her military service, and has opened her home up to all kinds of rescued dogs and cats. She’s a loner by choice, but her big, loving family really won’t let her be alone. Along the way, she starts working with a vampire named, Quinn. Quinn used to be a policeman, but now works for the strongest vampire in the area(Colorado), which means that Lex is working for the vampire now also. I ended up really liking both of these characters. The jury is still out on the head vampire. A witch named Simon, also becomes important to the story, and actually was one of my favorite characters, besides the main two. Of course, there are more characters introduced and with the exception of the villains, I enjoyed those characters and look forward to seeing them in future installments.

There’s something to be said about a book that starts out so exciting. Non-stop action can pull me into a book very quickly, but if it doesn’t stay well written and interesting, it can lose me fast. This book pulled me in and never let me go. I listened instead of read, so that made it even more fun, especially the action parts. There’s plenty of back story told about Lex’s life, especially when she was deployed in the Mid East in the past. The author has done a lot of world building about the supernatural world as well, always a good thing in an urban fantasy type read.

Narration by Kate Rudd? I thought it was good and look forward to listening to the next books. I had never listened to her before and will be on the look out for more that she has narrated besides these.

On purpose I am not going into what her supernatural talents are, or who the main vampire is. Or really what’s going on with her niece(other than what the blurb says). I don’t want to spoil this for readers. If you love urban fantasy, or even urban fantasy/paranormal romance than, this is perfect for you. At this point it’s still almost young adult, although there is plenty of violence. As with any series, that rating could change as these characters are adult. At this point, I would recommend this to readers 15 plus. Very well written and highly recommended!