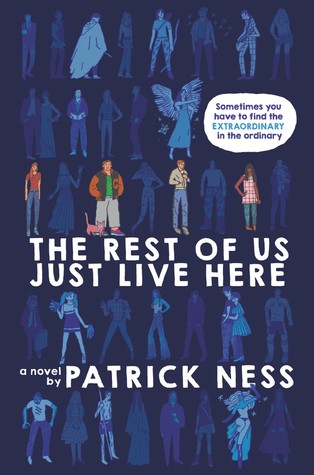 A new YA novel from novelist Patrick Ness, author of the Carnegie Medal- and Kate Greenaway Medal-winning A Monster Calls and the critically acclaimed Chaos Walking trilogy, The Rest of Us Just Live Here is a bold and irreverent novel that powerfully reminds us that there are many different types of remarkable.

What if you aren't the Chosen One? The one who's supposed to fight the zombies, or the soul-eating ghosts, or whatever the heck this new thing is, with the blue lights and the death?

What if you're like Mikey? Who just wants to graduate and go to prom and maybe finally work up the courage to ask Henna out before someone goes and blows up the high school. Again.

Because sometimes there are problems bigger than this week's end of the world, and sometimes you just have to find the extraordinary in your ordinary life.

Even if your best friend is worshipped by mountain lions.


People ask me all the time why I read young adult fiction. This book is definitely one of the reasons. I wish I had had this caliber of books to choose from when I was young, instead I ended up reading more than my share of Gothic mystery/romances. Not that they weren’t good, but there’s just way more genre’s and variety to choose from now for that age group.I would classify this book as older young adult however-16 plus.

Small town America in Washington state and located in the middle of the boonies. It’s here where the immortals from another realm decide to take over human bodies in order to live. And this has been happening every few years-ten, fifteen, or even less-when paranormal creatures of every sort(one group at a time)try their hand at taking over the town. Every time it happens, the indie kids of the town, otherwise known as the artists, musicians, goths, etc. start dying. But this book isn’t directly about indie kids. Instead, it’s about a group of seventeen/eighteen year old teens that are getting ready to graduate high school. They have grown up together and been each others best friends for years. Now as strange happenings start to haunt the young people in the town, all they can do is watch as it all unfolds. Interestingly, the adults turn a blind eye to the happenings, instead referring to the deaths as suicide or accidents. They conveniently forget what happened to the town when they were teens, or at least they choose to ignore it.

Mike is both the narrator and the main character. He’s obsessive compulsive, and pretty broken inside. His older sister Mel has been fighting anorexia for several years. Having missed a year of school due to the disease, she is going to be graduating with her brother’s class. Mel’s best friend is Henna, otherwise known as the girl that Mike has loved in secret for years. She’s beautiful, but a bit damaged, after her only brother disappeared when the vampires took over years ago. Now they only get the occasional email from him-always sent at night. Mike’s best friend is Jared, a jock, and he just happens to be gay. Refreshing to see that he isn’t judged for that. He also is one quarter Cat God(yes, you read that right). A new guy joins their group named Nathan, and when he gravitates towards Henna, he becomes the person that Mike suspects as being the catalyst for all the bad that starts happening in town. Mike and Mel’s mother is a state senator and is not around as much as she should be, and their father is an alcoholic car salesman that spends most of the time in a drunken stupor.

This book. What a book hangover I have now. I couldn’t put it down because the suspense was killing me. Yes, these characters aren’t the ones being killed, or the ones expected to defeat the bad guys, but they are indirectly involved. Sometimes a bit more directly involved. But they aren’t the Chosen Ones, as they call the indie kids. The characters are so well drawn by the author that each one felt like someone I knew before it was over. I am not going to go further into the story except to say that at times I was on the edge of my seat while reading. There’s plenty of down time away from the suspense, but you just know something is going to happen to change that at any moment.

Wonderfully written characters, humor(Cat God?), and a unique story line made this a read that I probably won’t be forgetting anytime soon. I had never read anything by this multi award winning author, but I am glad I started with this one. Highly recommended to readers of horror/paranormal, 16+ due to sexual situations, although nothing explicit.

20 responses to “Review: The Rest of Us Just Live Here by Patrick Ness (@Mollykatie112, @Patrick_Ness)”