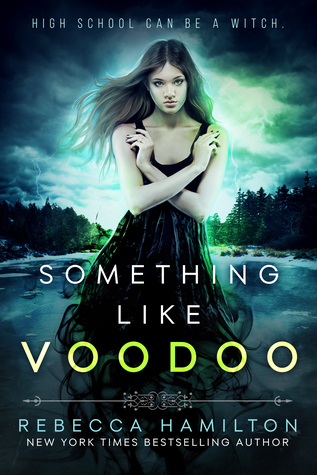 A teen girl with the ability to predict deaths through her drawings shouldn't need to lie constantly to make her life sound interesting. But that doesn't stop Emily from spinning stories faster than she can keep up.

After transferring to a new school, Emily's 'dull' life is shaken by the appearance of a boy who seems unfazed by her far-fetched stories. A too-handsome-for-his-own-good senior, Noah has some secrets of his own. He needs Emily's special gift to save him from Sarah, queen bee of the school's It Girls, whose own supernatural abilities have forced him into a life of silence and solitude.

But when Emily tries to free him from Sarah's voodoo curse, things go belly up, landing Emily on Sarah's hit list. Soon, Emily and Noah are on a collision course with the It Girls, leading to a shocking revelation that ties them together in unimaginable ways. If their powers remain unchecked, this teenage popularity contest could spell the death of them all ...

Romantically charged and eerily chilling, Something Like Voodoo weighs the choice of saving your life versus fighting for a life worth saving. This young adult paranormal romance will put a spell on you.


Mean girls, or the so called It Girls of high school, can make other girls life miserable, that’s a given. But what if the Queen Bee of the It Girls has supernatural powers? Powers that date back centuries, recently awakened by her using a voodoo spell, and used to keep her fellow It Girls loyal, and keep one particular young man under her thumb-and submissive. That’s the premise of this young adult read, and it had me on the edge of my seat several times while reading.

When seventeen year old Emily and her father relocate to a small town in New Jersey after her mother’s death, she’s really not happy. She’s nowhere near done grieving for her lost mother and now she has to start over at a new high school, middle of her senior year. The first person she meets at school is Noah, when she literally runs into him. It’s not long before she realizes that there’s something up with Noah-and not in a good way. But he seems to like her, and he’s hot and a jock, just to keep things more interesting. Sarah is the Queen Bee of the school and not at all pleased that Noah seems interested in Emily. Noah is her property period, end of discussion, and she wasn’t having Emily trying for him-even though it’s Noah that’s interested in Emily. And this puts Emily on Sarah’s radar. Not a good thing with any Queen Bee, but Sarah is just plain evil personified. When Emily witnesses Noah being mentally tortured by Sarah to the point of hospitalization, she knows she has to help Noah get out from under Sarah’s spell.

Emily was an interesting character, and not very typical for a YA heroine. She tells lies about all sorts of things to people-especially her father. He’s about had it with her lies, but they are still all each other has in the world. She does a lot of things that I would never have done at her age, taking the car and driving an hour away on a school night, things like that. Of course she gets into trouble and continues to do things like that. She has reasons to do with helping Noah, but to her dad it’s just another time she has lied to him. I was a bit frustrated with her at times. I should also mention that she has a paranormal gift of her own. One that causes her to draw pictures of people that are going to die. Noah is a good guy, but since he is under Sarah’s spell, we don’t see as much of his personality-except in a couple of safe zones he has developed where he can not be seen by Sarah. He does care for Emily and he spends time trying to keep Sarah from hurting her. On Sarah’s part, there really isn’t anything redeeming about her. Perfect high school villain.

This ended up being a bit scary at times, and was way more than just a voodoo spell read. There’s reasons behind everything that happens and pretty much all of it is paranormal. There’s a big twist I never saw coming, a mystery, and some actual real life and death moments. If you like YA books that feature heroines that are not cookie cutter, romance, and some fairly unique paranormal, bordering on horror, elements, this may be one you may enjoy. For those that don’t like a book that takes place partially at high school, not going to lie, there are plenty of those scenes. But there’s just as many that don’t take place there. I did enjoy the read although at times I was a little frustrated by Emily. And actually even with the lies, she was otherwise very likable.

I would recommend this to paranormal romance readers aged 14 plus. FYI-No name of a sequel is given, but there is mention of a second book in an authors note I read on Amazon.

24 responses to “Review: Something Like Voodoo by Rebecca Hamilton (@Mollykatie112, @InkMuse)”