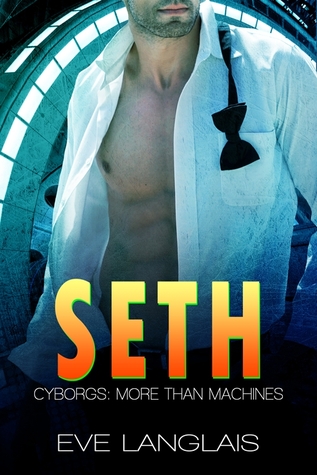 seduce the only woman he ever loved, without getting killed.

Cybernetic spy models are different from other humans turned machine. For one thing, they never completely lost touch with their humanity, or their memories. But retaining their identity doesn’t mean the military didn’t mess with their lives. Seth lost the woman he loved because of their web of lies. When the chance arises to make things right, he relies on his superior intellect—and irresistible charm—to prove his innocence, and make Anastasia his again.

Anastasia might possess upgraded parts and programming, but the scientists never could cure her of her biggest weakness, jealousy. The volatile emotion made her walk away from love once. Can she overcome it and recognize the truth? Or will she continue to let the military manipulate her emotional strings?

It was so great to be back in the world of the cyborgs. I’ve been away from them for a little while. Not 100% sure why. I know part of it was new releases that I had for review. Anyway, I was glad to back in this world. And with a character that I’ve loved since I first met him. Seth isn’t anything like his other cyborg brothers. While he is a cyborg, he was a spy unit, which means that he was left with his personality in tack so that he could blend in with other humans. His personality drives many of his less personable cyborg brothers crazy.

This story is told in the present, but also in the past. We learn a lot about how Seth became a cyborg. We also get to meet his wife. Yes, Seth was married and his estranged wife returns because she needs his help. She is also a cyborg and a spy unit. They were in the same program and were “enhanced” at the same time. They separated after some very large misunderstandings. She walked in on him, naked, with another woman, I would’ve left him too. Problem was, he doesn’t know how he ended up there. He was set up.

This was another really fun story. Second chance romances aren’t high on my list of tropes. But, I do enjoy them when they are done well, like this one. It just isn’t something I look for, but I don’t mind them when I stumble upon them. I loved the humor in this book. The innuendo is hilarious as usual. We also got to learn more about the cyborgs and their origins.

“Hey, watch what you call my man parts. You’ll hurt Arthur’s feelings.”
“Arthur? What the hell kind of name is that for a penis?”
“It’s a mighty name. A name fit for a king.”

“So I should be excited I’m about to be an assassin for my country?”
“Yes. What else can we do but turn it into an adventure? We will be the Mr. and Mrs. Smith of the military. We will go on this mission. Play the part of rich snobs. Eat fine food. Wear ridiculously expensive name-brand clothing and save thousands of people from the follies of two power-hungry asshats.”
“When you put it like that, it sounds almost fun.”

“You were shot in the ass?”
“Yeah.”
“I’m almost afraid to ask. Why?”
“In a nutshell? Angry daddy. Not-so-innocent daughter. And me, running bare-assed through a corn field.”