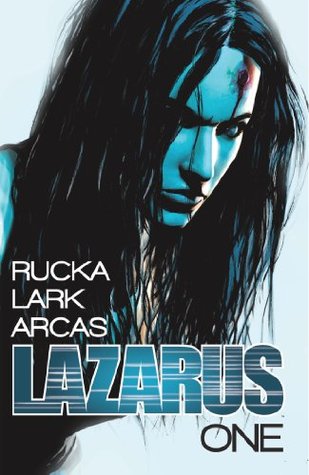 Eisner-winning team of Rucka and Lark's critically acclaimed new series about Forever Carlyle, the Lazarus of the Carlyle Family.

In a dystopian near-future, government is a quaint concept, resources are coveted, and possession is 100% of the law. A handful of Families rule, jealously guarding what they have and exploiting the Waste who struggle to survive in their domains. Forever Carlyle defends her family's holdings through deception and force as their protector, their Lazarus. Shot dead defending the family home, Forever's day goes downhill from there...

With a title like LAZARUS, it should be obvious that this graphic novel has something to do with someone coming back from the dead . . . But I didn’t really think about that (tangentially related to my reluctance to read blurbs, I think), or the implications, and I had a momentary panic attack during the first few pages when the something in question appeared to be on the verge of a zombie-like attack on her killers when she revived . . .

It was a false alarm. She beat them to death instead. Forever Carlyle is the enforcer for the Carlyle Family. We don’t know what, but something destroyed our way of life, and a handful of powerful Families and their offspring rule what’s left of the world . . . These families appear to basically be tyrants ruling their individual territories, a fraction of a fraction of 1% controlling everything, with maybe 5% “lifted” into their service if they have an attractive aptitude, while the rest are left to fend for themselves.

It’s ugly, people. True lawlessness for 95% of the world’s population.

The Families don’t need to worry about things like that, b/c they each have a Lazarus. Forever is one such Lazarus, and her job is to keep the rest of her family safe and to unquestioningly do the bidding of her father, the Family patriarch. She does this even after she’s been killed—the specifics are unclear, but Forever is enhanced. What is immediately clear is that it’s not that simple . . . Forever’s moods appear to chemically managed and vague remarks about the legitimacy of her status as a Carlyle are made when she’s not around to hear them . . . Whatever the truth about Forever is, one thing is more than obvious: her Family sucks.

But as much as I grew to hate the rest of them, I loved Forever (despite her bad pun of a name), who managed to be both a seriously badass warrior woman and a naive girl seeking the approval of her family. After a lot of Family scheming and machinating, we meet another Lazarus and learn that the scheming isn’t limited to in-house maneuverings, and rather than this twist making things convoluted or taking away from the action, it just got more interesting. I loved it. I loved it so much that I read the other three available volumes back-to-back-to-back, which has only happened two other times (SAGA and FABLES, and I kind of regret FABLES).

LAZARUS is about an indulgent and technologically advanced few surrounded by the poverty of those they neglect. It’s about the rot that indulgence has nurtured. It’s about a girl created to be her “family’s” loaded gun. My hope is that said gun backfires in the hands of her would-be wielders and takes their whole damn heads off. One response to “Review: Lazarus, Vol. 1 by Greg Rucka”