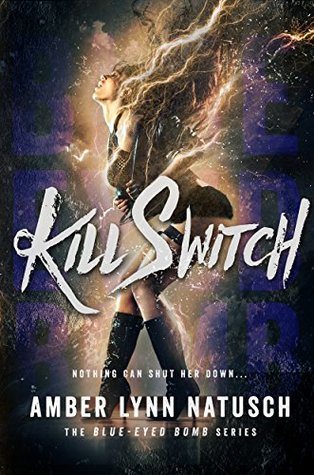 As the daughter of two immortals, Sapphira was born with incredible power. Mastering it nearly cost her life, but with the help of her brothers, she was able to start over in Chicago, helping them police the supernatural community.
While tracking down a missing person, an unexpected accident unlocks a terrifying new power—the ability to experience the last few moments of a victim’s life. Following what she sees leads Sapphira, Nico, and Alek to more missing girls with special powers, and a growing realization that they're running out of time. Will Sapphira prove to be the girls' savior, or will a risky plan doom her to a similar fate...

Book two of this author’s Blue Eyed Bomb series doesn’t disappoint to say the least. In book one, Live Wire, we were introduced to Phira, a new member of the PC. The PC is a supernatural group responsible for keeping the world safe from supernatural criminals or problems. Phira’s father is Sean, son of Ares, the Greek God of war, and Ruby, a powerful and rare breed of werewolf. These two were the main characters in Natusch’s, Caged series, a favorite of mine. Needless to say, I am completely invested in this series, as I was from pretty much the beginning of Live Wire. If you plan to read Live Wire-which I highly recommend-then you might not want to read this review as it contains spoilers about that book that can’t be helped.

When young women from a small town in Iowa start disappearing in a supernatural way, the PC is on the job to figure out what is happening. All of the women have a supernatural gift and it would seem someone powerful wants to exploit them. The clues all point to the women being taken to Chicago and Phira ends up being sent to work at a strip club that employs these vacant eyed women. She is acting as a D.J. and announcer for the club. Meanwhile, women’s bodies are showing up. Women that are a part of the kidnapped group.

Phira is immortal and very powerful in her own right. She has two brothers that are also PC, but she is the only one of the siblings that inherited another being residing within her body, as Ruby has as well. As Scarlet was Ruby’s bad half, so is Nyx, Phira’s bad half. Phira is still coming into her powers and growing stronger daily. Nyx introduces herself as Death, when speaking to an enemy and she doesn’t exaggerate at all. She just has to take over from Phira to demonstrate. Phira tries to keep a close tie on Nyx, but that doesn’t always work. This particular part of the PC lives in a converted warehouse in Chicago. Besides Phira’s brothers, the place is home to Phira’s evil uncle, Muses, and three of the Fates. T.S. also lives there. Up until the groups last mission at Gabe’s farm, he had been appointed her watchdog by Sean. Now that Phira has proven herself, he still sticks by Phira on his own. Rounding out the group is Gabe, who we first met in Live Wire when Phira shows up at his farm in the middle nowhere with amnesia. Gabe has magic in him as well, although it’s new and no one is really sure what he exactly is yet.

After bonding with Gabe in Live Wire, I really wasn’t happy at how he was treated by Phira in this book. He doesn’t understand why she can’t be with him. And she can’t be with him because of the nature of her work with the PC. Another reason is that they met when she had amnesia, now that she is back to herself, she knows she isn’t really the woman Gabe fell for.Instead, in this book, T.S. becomes more of the love interest-maybe. I really liked T.S.. Of course, not knowing what Gabe is and what he is capable of doesn’t help matters, neither does his horrible temper and jealousy.

I am looking forward to seeing how Phira progresses as her involvement with the PC deepens. I am particularly interested in what happens with both T.S. and Gabe. I would categorize this as mainly urban fantasy, with a side of paranormal romance. I am hoping that the romance part evolves as we go, as it did in the Caged series.

On purpose, I have not told more about the actual events in the story due to spoilers. But there are action scenes, terrible villains, and deaths in this book, and Phira gets a scary new power that comes into play at times. Add in the possibility of romance, and this book was one I enjoyed immensely. Highly recommended to adult urban fantasy/paranormal romance readers 16 plus, although this was light on the romance this time around.