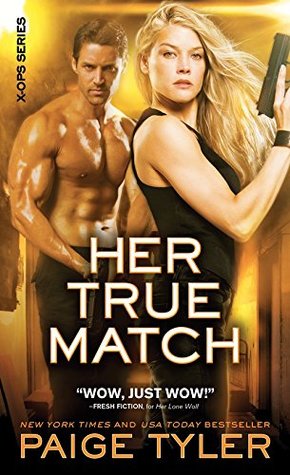 FORCED TOGETHER
When feline shifter Dreya Clark is escorted from the police interrogation by two secret agents, she thinks she's dodged a bullet. That sexy detective Braden Hayes caught her stealing red-handed. When she finds out what she has to do to stay out of jail, suddenly she's missing the hot cop with the piercing gaze. She's being recruited for her shifter abilities by the Department of Covert Operations.

WILL DANGER RIP THEM APART?
Braden has been chasing the smart-mouthed cat burglar for years. But when Dreya's taken away, he knows their game of cat and mouse has turned deadly-serious. There's no way he'll let her go off alone. Fur flies and temperatures flare as Braden realizes Dreya is much more than she appears. Thrown together on a dangerous covert mission, this unlikely pair will have to rely on each other to make it out alive.

Her True Match is another great installation in Paige Tyler’s X-Ops series. I truly love this series with it’s mix of spy and black ops type missions entangled with a paranormal shifter world that is different from many of the shifters that we typically read about. In this world, shifters haven’t come out to the majority of humans. They also don’t shift entirely into their animal forms like in most shifter stories. They grow fangs and claws and their eyes will change. They have enhanced senses and some of the personality traits of their other shifter form (like cat shifters that feel the need to get out and hunt, even isn’t the same kind of hunting that a cat would do).

In this story, we follow Dreya. She’s a cat shifter and a cat burgler. We met her in the previous book, Her Rogue Alpha, when she stole something very important from a very evil man. She fled the country before he had her killed, but not before others will killed looking for her. She’s now come back to DC and is back in the thieving game. That’s when Detective Braden Hayes actually catches her in the act of stealing something from a very high, hard to access apartment building. He also witnesses some feats that shouldn’t be possible for a human. DCO (Department of Covert Affairs) bails her out, but Detective Hayes won’t let it go and follows them when she leaves.

So there’s this storyline of Hayes and Dreya working together to join DCO as a team. They also come together romantically. Hayes has to come to terms with the fact that Dreya isn’t human. He does take to that very well. They go a few missions together before officially signing on.

There’s also another storyline that is following Ivy and Landon and their quest to bring down the hybrid research centers. This time, they bring along a coyote shifter named Trevor. Trevor gets himself committed into a mental hospital where the lab is at. He works to gain access to the ward with the hybrids. While in the hospital, he meets a young girl. She’s worried about her friend who was taken into this ward where the hybrid labs are at.

This is another great addition to this series. With the two storylines going, there is no shortage of action. It also makes for a great overall story arc for the series. I would recommend starting this series at the beginning because of this series story arc. The hybrid search is a great storyline, but it is also a bit repetitive. Ivy and Landon find a lab, infiltrate the lab, kill or rescue shifters or hybrids, doctors get away, rinse and repeat. It’s a fun story, but we’ve seen similar scenarios in several books now.

I do love this series, even if there are a few things that are repetitive. The romance isn’t as strong as some PNR. That isn’t an issue for me, but for people looking for more of the romance and less of the suspense, this story is much stronger on the suspense side of things. I love suspense and lots of action, so that works great for me. I also want to say that the ending of this story changes a lot of things. It will be very interesting to see where Ms. Tyler takes the story from here, because it will not be following the same path that it’s been on. That ending was amazing.

Trevor almost followed after the woman when she turned and walked away so he could ask her if it was legal to work in a mental health facility if you hadn’t seen One Flew Over the Cuckoo’s Nest. He decided not to bother. Being snarky lost all its appeal if you had to explain it.

When she found one she like—a gray shirt with the word Property of the Metro PD across the front—she laughed. A thief wearing a shirt like this should be in the dictionary somewhere under the definition of irony.