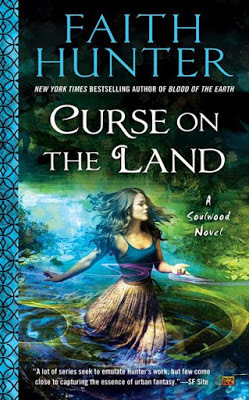 Set in the same world as Faith Hunter’s New York Times bestselling Jane Yellowrock novels, the second Soulwood novel tells the story of a woman whose power comes from deep within the earth...

Before Nell Ingram met skinwalker Jane Yellowrock, she had no one to rely on, finding strength only in in her arcane connection to the dark woods around her. But now she has friends in the newly-formed PsyLED team to keep her grounded—even if being part of the agency responsible for policing paranormals presents dangers of its own...

After training at the PsyLED academy, Nell returns home to her woods to find the land feeling sick and restless. And that sickness is spreading. With the help of her team, under the leadership of agent Rick LaFleur, Nell tries to determine the cause. But nothing can prepare them for the evil that awaits: an entity that feeds on death itself. And it wants more...

When I found out that Faith Hunter, author of beloved JANE YELLOWROCK series, was writing a new urban fantasy series about fae in my backyard (Oak Ridge, TN), I whooped.

Literally. Out loud. At a convention. It was kind of embarrassing.

*whispers* I got over it.

And after the awesomeness that was this second installment, I even feel justified. Not that I’m surprised. B/c Faith Hunter.

If you’re familiar with my reviews of the aforementioned JANE YELLOWROCK series, you know my one reservation was that Rick Lafleur (the slimeball) is a significant character in this spin-off from Jane’s world.

I’m not sure, but he might even be the inspiration behind the creation of my hate-loathe-despise-and-abominate shelf on Goodreads.

But we were told that Rick doesn’t get off unscathed, doesn’t get to skip off into the sunset and live happily ever after, after he didthething (which elicited another vocal response, this time of RAGE—an author who can provoke such visceral responses speaks for herself, doesn’t she?), and in CURSE ON THE LAND we finally see that promise come to fruition.

*is gleeful* *maybe even smirks*

And do I feel sorry for him in the aftermath? That would be a resounding NO. View Spoiler »1. Finding out part of what made him follow Paka out of that vamp party was her own personal flavor of magic ensorcelling him didn’t make me any less angry, b/c let’s face it—he’d probably have done it anyway, the inconstant bastard. AND we found out right before he’s (somewhat?) healed from the effects, so not a lot time to contemplate the possibility of misjudgment (b/c fine now, so who cares?).

2. Which ultimately means he’s free of her. *waves goodbye to Paka*

3. Now that he’s all alone, his life a shambles, maybe he’ll be forced to take a good look at the decisions that led him to his current place of misery and *rolls eyes* regret. Make some changes and whatnot.

As long as those changes don’t involve him trying to make things right with Jane. If she ever, and I do mean EVER, takes him back, I will lose my bloody mind.

Actions must have consequences. How else is a lesson learned supposed to stick? « Hide Spoiler


Moving on from my Rick rant, SOULWOOD #2 has much more to offer than resolution to long harbored resentment of a member of Nell’s supporting cast.

Me: Things like Old Ones slumbering deep in the earth.

Which of course is going to take some doing from Nell and her PsyLED cohorts.

And that’s not all. There’s also Knoxville turning into an alien landscape of black slime mold and scary flowering outgrowths, revived Nazi plots, corporate espionage, escalation of individual’s superpowers and the resulting abuse, lions and tigers and bears, oh my!

So, I repeat, READ THE BOOK. Highly recommended.