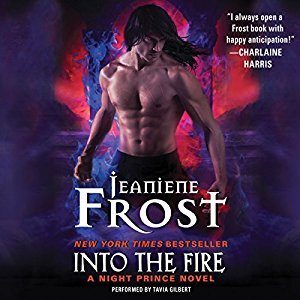 In the explosive finale to New York Times bestselling author Jeaniene Frost’s Night Prince series, Vlad is in danger of losing his bride to an enemy whose powers might prove greater than the Prince of Vampires’ . . .In the wrong hands, love can be a deadly weapon

For nearly six hundred years, Vlad Tepesh cared for nothing, so he had nothing to lose. His brutal reputation ensured that all but the most foolhardy stayed away. Now, falling in love with Leila has put him at the mercy of his passions. And one adversary has found a devastating way to use Vlad’s new bride against him.

A powerful spell links Leila to the necromancer Mircea. If he suffers or dies, so does she. Magic is forbidden to vampires, so Vlad and Leila enlist an unlikely guide as they search for a way to break the spell. But an ancient enemy lies in wait, capable of turning Vlad and Leila’s closest friends against them . . . and finally tearing the lovers apart forever.

What should have been a fiery finish to Jeaniene Frost’s NIGHT PRINCE series was a bit of a dud. INTO THE FIRE was all about Ian which made Vlad & Leila the protagonists of this story in name only. Per an FAQ on the author’s website, there’s a spin-off in the works for the former, and I get the need to propagate that message, but this could have been done in a more tasteful manner rather than hijacking Dracula’s happily-ever-after.

I still got a fair amount of enjoyment out of this novel including some good laughs. We learn about the origins of the heroine’s powers, and Mencheres makes an appearance, although the shock factor in relation to his character was a bit of a joke because I didn’t believe for one second that that thing that happened actually did, there’s just no way. That being said, I did get a kick out of the male cast sprouting boobs and totally owning their glamoured disguises.

Vlad & Leila’s fairy tale ending lacked passion—the token sex scene notwithstanding—there were too many secrets between them for a couple who’s supposedly embracing forever together, and the resolution vis-à-vis Mircea was so corny. Frost could have made this into a killer trilogy, but instead book 4 came along, and crapped the bed. This is the lowest rating that I’ve ever given something that was written by this author, and it really makes me sad.

I pre-ordered this audio months before its release because Tavia Gilbert is an experienced narrator whose familiarity with this universe and its inhabitants is beyond measure. She reads Dracula’s parts well without falling into the stereotypical trap that would be all too easy to adopt, and the energy that she brings to the love making bits will leave you blushing and a little jealous. Her voice was the saving grace of this audiobook.

INTO THE FIRE is where your paperback copy should go. However, if you really must, listen instead.

7 responses to “Audiobook Review: Into the Fire by Jeaniene Frost”