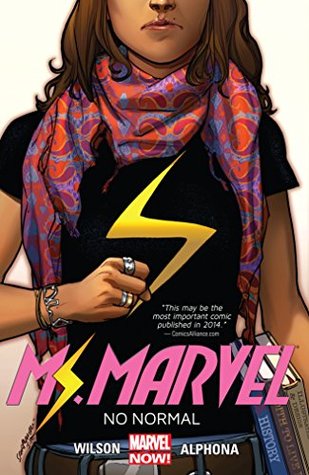 Marvel Comics presents the all-new Ms. Marvel, the groundbreaking heroine that has become an international sensation! Kamala Khan is an ordinary girl from Jersey City - until she is suddenly empowered with extraordinary gifts. But who truly is the all-new Ms. Marvel? Teenager? Muslim? Inhuman? Find out as she takes the Marvel Universe by storm! As Kamala discovers the dangers of her newfound powers, she unlocks a secret behind them as well. Is Kamala ready to wield these immense new gifts? Or will the weight of the legacy before her be too much to handle? Kamala has no idea either. But she's comin' for you, New York!

For all of you out there screaming, WE NEED DIVERSE BOOKS! I got your diverse graphic novel right here. When Ms. Marvel begins, Kamala is the teenage Muslim version of Toula in MY BIG FAT GREEK WEDDING. She’s lamenting the uncoolness of her heritage and daydreaming about being a blonde, kick-ass boot wearing superhero. It’s the weekend and (once again) she’s forbidden from going to a party (b/c boys and alcohol), but she’s had enough of her parents stifling rules, so she sneaks out and goes to said party anyway.

It’s a disaster of mean girls and dumb jocks, but as she’s leaving, a strange fog rises in the city . . . Kamala passes out, has a strange Bollywood/Avenger dream, and wakes up as a very blonde, very WASP Ms. Marvel. Thus begins Kamala’s journey of self-discovery, both the limitations of her new abilities and who she is as Pakistani teenager in America.

And I gotta say, I love her. Kamala is a Geek Girl of epic proportions. She’s a girl that anyone who reads Ms. Marvel-type things could see themselves being friends with.

B/c G. Willow Wilson did more than highlight the differences between the minority and the majority. She presents Kamala’s struggles in a way that relates to everyone, regardless of background. *stands* *ovates*

My only complaint is that it ended rather abruptly. Not in a cliff-hanger way, in a mid-sentence type way.

I’ve got four more volumes of Ms. Marvel waiting for me on my Kindle, so I’ll soon be back with Kamala, seeing what hilarious versions of things like YouTube (MeTube) her world has to offer. #noharmnofoul