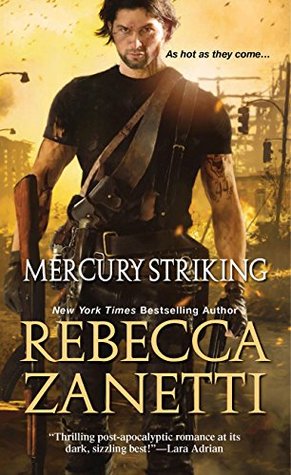 With nothing but rumors to lead her, Lynne Harmony has trekked across a nightmare landscape to find one man—a mysterious, damaged legend who protects the weak and leads the strong. He’s more than muscle and firepower—and in post-plague L.A., he’s her only hope. As the one woman who could cure the disease, Lynne is the single most volatile—and vulnerable—creature in this new and ruthless world. But face to face with Jax Mercury…

Danger has never looked quite so delicious…

I’ve wanted to try this series since I saw it come out. I was hoping that it would be available on audio, but that hasn’t happened yet. I decided to bite the bullet and read the books. I just couldn’t wait anymore. I keep hearing such amazing things about this series. After reading this story, I’m really glad that I didn’t wait any longer.

This is a post-apocalyptic story. There is a bacteria that is unleashed upon the world. Not everyone dies from this bacteria. Some struggle through the fever and seem to be pretty normal. Others, on the other hand, are anything but. These people are known as Rippers. Some Rippers may seem normal, but are serial killers. Others don’t even act human. Some people don’t survive the bacteria.

Millions of Americans died of this bacteria. As a whole, we aren’t really sure if there is a functioning government or military. We are also not 100% sure what is going on in the rest of the world. Were they able to fight off this bacteria or not?

Lynne Harmony is a scientist at the CDC when the world went all to hell. There are many that feel that she is the cause of the bacteria getting released into the wild. She did contract the bacteria and survived it, but because of an experiment that was done to try to save her life, she now has a glowing blue heart. She escapes the clutches of the CDC and is trying to find a safe place to find a cure. She heads towards LA where she’s heard about this guy named Mercury.

Jax Mercury is a soldier who came home about the time of the bacteria. He starts to take in people and set up a stronghold in LA to try to protect people. The number of people in his little group continued to grow. Most aren’t soldiers. Most probably wouldn’t have survived if it wasn’t for Jax. He does have a few people in his inner circle who have either some experience or have trained really well.

There are several things that you would expect from a dystopian novel. You have people looting and gangs that will take advantage of the weak. In Jax’s group, he sends people out to scavenge for food, medicine and fuel. He has a guy with some medical background that is doing the work of doctors, just trying to keep people alive. There’s no power or technology (outside of cars).

While this story is a romance, it is really the world, characters and story that pulled me in. Don’t get me wrong, Jax and Lynne’s romance is a good one. It is slow, as would be expected with distrust of others set to 11. There is a lot of protectiveness, especially on Jax’s end. He really wants to protect his people, but he also has a pull towards Lynne.

I’m really excited to get to the next book. I haven’t looked yet to see who the next hero or heroine is. I know I have my hopes for a particular pair. 😉  I’m going to let the book surprise me. If you haven’t tried this series, I highly recommend it.

“Don’t try to reason with them. There are two main types of Rippers. The first is organized and intelligent like a serial killer. If one of these attacks you, it’s planned, and they have bad things in mind for you. The second is disorganized and just plain crazy, and they’re more likely to rip you apart like an animal. Run from either.”

“How do you know so much?”
“Books.” He idly played with her hair. “The judge who gave me the choice of military or prison kept in touch, and he loved philosophy and literature. He would send me books all over the world. At first I read just because I owed him. Then I read because I grew. Finally, I read because the words began to make sense.”