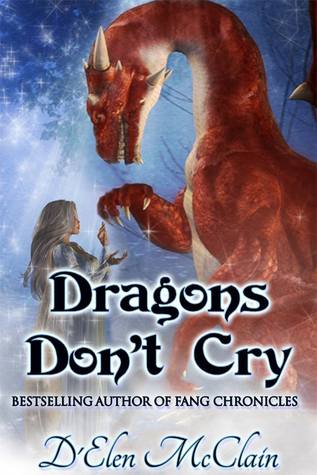 One pint sized human female who’s had too much to drink, not enough sleep, and absolutely no patience meets one stubborn dragon shifter with a chip on his shoulder.

Bastian claims Acasia, his unwilling bride, after she spends the night carousing with friends. She’s not happy, he’s pissed off, and with a curse from a goddess thrown in, you’ll see Bastian breathe fire.

Add secrets, treasure, and unimaginable heartbreak for an emotionally humorous read and discover why Dragons Don’t Cry.
.
Intended for mature readers. Has captive brides and is a New Adult Paranormal story.

This is the first of a four book series. Each book is a complete story though it's recommended you read them in order.


Fang Chronicles by D’Elen McClain was the first shifter series that became a must read for me. They were good romances with interesting, well drawn characters and were exciting, suspenseful reads. So, although the series ended awhile back, I finally made it back into this authors world with her next series featuring, DRAGONS!

For those mythology fans out there, this book features a curse on the four remaining male dragons. Hera, Greek goddess of marriage is quite spiteful(she has her reasons) and puts her curse on the dragons because she is mad at a fifth dragon. Not fair, but that’s just the way it is. The dragons are cursed to have one chance every hundred years to find a bride. If the bride is their true mate then the curse is lifted for that dragon. If not, they have to wait one hundred years for another chance. To make it more interesting, they literally only have minutes to pick a bride from chosen women in a small village. Really small odds for these dragons.

Bastian is a red dragon. He is still mourning the loss of his last bride thirty two years previously, when he claims Acasia and takes her from her realm to the dragon realm. The people of her town have always wondered what happens to the women that are taken, so Acasia is ready for anything-including being eaten. Bastian isn’t anyone’s idea of a fun creature, especially while in mourning. Acasia is feisty as they come and not willing to take anything from anyone if she doesn’t want to. What she doesn’t realize is that Bastian is a shifter, so there really is a man underneath all that huge mass of scales and fire breathing.

This read really didn’t take itself too seriously, so it was a fun, easy read for me. Bastian reminded me of a grizzly bear with a teddy bear inside. He’s actually a pretty good guy, but he’s got a major temper. Acasia doesn’t realize that Bastian is actually the dragon for awhile so it was interesting to see the two fall in love. Acasia isn’t like any of his other brides, she is so outspoken, and at times she seems to go out of her way to make Bastian mad. I also liked that there is so much magic inside these dragons, and we do meet all the dragons and their brides. The world the author has built created more realms than just Earth. And Acasia comes from a completely different realm than Earth. I think my favorite part of the read is when Bastian and Acasia actually visit Earth. For fans of the Fang Chronicles you will understand why fairly quickly.

So, good characters, unique premise, romance, and dragon adventures ended up making this a good read for me. It’s definitely an adult read due to very sensual scenes. I recommend this to readers that love shifter romance with a unique premise-and dragons!