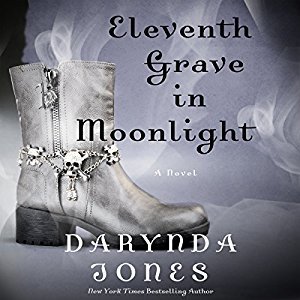 My entire life can be summed up in one sentence: "Well, that didn't go as planned." (T-shirt)

As a part-time private investigator and full-time grim reaper, Charley has to balance the good, the bad, the undead, and those who want her dead. Now Charley is learning to make peace with the fact that she is a goddess with all kinds of power and that her own daughter has been born to save the world from total destruction. But the forces of hell are determined to see Charley banished forever to the darkest corners of another dimension. With the son of Satan himself as her husband and world-rocking lover, will Charley be able to defeat the ultimate evil and find a way to have her happily ever after after all?


I read the past three CHARLEY DAVIDSON titles, and looking back that was a mistake because Lorelei King’s voice has become as synonymous with these books as the t-shirt quotes. Things are still trucking along after 11 volumes, some for the better, and others not so much. Like any long running series, it’s had its hiccups. More questions get added while as others are answered, but overall ELEVENTH GRAVE IN THE MOONLIGHT was another set-up installment for what is to come, and personally I’m beginning to feel like Darynda Jones has published one too many of these.

I can’t knock the humour, the characters or the diverse plot lines. The author knows how to write a fun story, I’ll give you that. Davidson has a tell-all session with a shrink that left me in stitches, and her latest quandary on what to call Reyes’ dink—the Vampire Lestat or Angry Johnny? —is up there with “Danger” and “Will Robinson”. Still, as certain death looms in the not so distant future, it’s becoming increasingly difficult to buy into her godhood, and believe that when the time comes, Charley will be able to focus long enough to get the job done.

My issue from the previous novel with regards to Ubie was addressed, and the protagonist is making inroads towards seizing the power that’s within her grasp. All good signs. The Diviners cult thread was definitely an eye-opener in more ways than one. We learn a lot about Davidson’s pre-reaper days which was long overdue, although I am having trouble piecing the then and now together because the two versions of Charley are polar opposites, but I’m positive that Jones has something up her sleeve. BIG things better happen in book 12 after that ending otherwise meltdown city over here!

Lorelei King was spectacular! I really am kicking myself for succumbing to the lure of shiny advanced review copies. Hopefully I have learned my lesson, and will pre-order the remaining audiobooks from here on out. She didn’t add any new tricks to her wheelhouse other than maybe an Scottish accent during Davidson’s impromptu trip across the pond where she happens to stumble across another closet like the one that kept her hidden at the convent. King is as steady as a rock in her delivery of this series; I’d know blindfolded what she was narrating from the moment she opened her mouth.

ELEVENTH GRAVE IN THE MOONLIGHT did nothing to alleviate my craving for more CHARLEY DAVIDSON, if anything it only made matters worse.