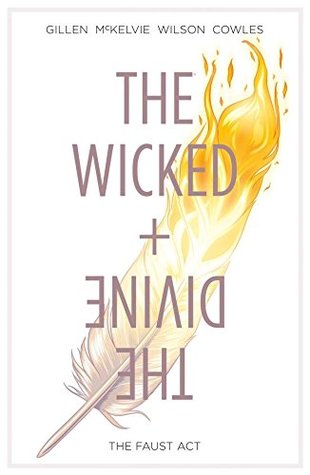 Every ninety years, twelve gods incarnate as humans. They are loved. They are hated. In two years, they are dead. The team behind critical tongue-attractors like Young Avengers and PHONOGRAM reunite to create a world where gods are the ultimate pop stars and pop stars are the ultimate gods. But remember: just because you're immortal, doesn't mean you're going to live forever.

SO. Every ninety years a bunch of gods take over the bodies of a bunch of teenagers to live as pop stars for two years before they die. Riiiiight. B/c gods have nothing better to do than become Taylor Swift. Fame is everything. Worship. Adulation.

Know what else is boring? They don’t use their god-like powers b/c it will scare the puny humans.

Is it just me, or are these the lamest gods ever? When a rooftop of zealots (at least that’s what I’m assuming they were, b/c their animosity is never really explained) opens fire on a gathering of the godlings, Luci says, to hell with that! and explodes their heads with a snap of her fingers.

She’s then arrested—how dare she kill the men who’d been trying to kill her—and Luci is taking the situation about as seriously as I am, until while jokingly threatening the judge with another finger snap, the man’s head actually explodes.

That’s the question, isn’t it? To the detriment of everything else.

Why every ninety years? Why are they dead within another two? Why aren’t they always the same gods? Where do all the other gods go? How are the teenagers chosen? Why pop stars?

Just make the god groupie satisfactorily indignant, throw in a hot vampire-looking death god, make a few jokes, blow some shit up, and we’ll forget all but one of the unanswered questions. But guess what? By the end of vol. 1, we still don’t know who killed the judge.

THE WICKED + THE DIVINE . . . was a lot of shiny distractions with periodically deadpan dialogue to mask the lack of substance in the plot. Not impressed. Not recommended.

The Wicked + The Divine:

SIDE NOTE: obviously they aren’t always pop stars—pop stars didn’t exist the last time they showed up—but they’re always whatever the current coolest kids are. Back in the 1920s, it looked like they were clairvoyants or mediums. Before that? Who cares knows?

4 responses to “The Wicked + The Divine by Kieron Gillen”