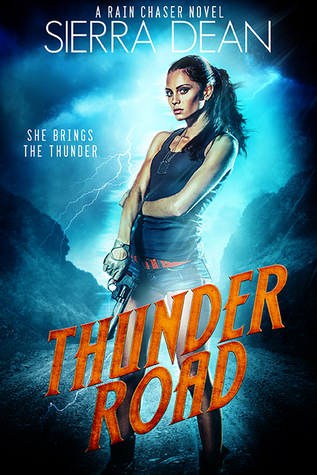 Being Chosen was supposed to be a gift.

That’s what Tallulah Corentine’s parents told her when they handed her over to the Rain Chasers on her seventh birthday. It was an honor to be born with a destiny, to be hand selected by the gods before taking her first breath. She should be overjoyed.

Twenty years later, Tallulah is still waiting for the gift. She might have the power of the storm at her fingertips, but she’s spent her whole adult life living under a cloud.

A cross-country trip to find the wayward son of Seth, god of the storm, turns into a fight for her life when she dupes Death out of a valuable treasure. With only a wily con man, a dangerously handsome bad-luck priest, and a lot of lightning to help her, can she deliver the package and keep herself out of an early grave?

Or will Seth be looking for a new Rain Chaser before it’s all over?


Sierra Dean is one of the authors that I turn to whenever I’m in the mood for snark with a healthy serving of violence. I wasn’t keen on the premise—Greek mythology, specifically the god of thunder storms—because it’s been done A LOT, but sometimes a fresh take on a classic can work wonders. THUNDER ROAD didn’t break the mold however, it did provide hours of entertainment which is good book 101.

Oddly enough, I was happy to discover that clerics are celibate. Can I get a hell yeah for no impending insta-love or romantic triangle!?! Oh wait, I may have spoken too soon. Tallulah’s not exactly pure, and she’s developed quite the chip on her shoulder since being “chosen”. The sexual tension between her and Cade was unmistakable, and they do exchange a few heated kisses. Are vows thicker than hormones? We shall see…

The lore didn’t stray too far outside of the box; all the usual suspects were accounted for including Hecate, Hades, Apollo, and Cerberus with some crossover into other legends such as Irish (the Morrigan), Roman (Manea), and Hindu (Ardra) to make things interesting. I liked the modern twists like how there’s an app that tracks tithes, and the clerics respond to prayers when they’re not busy running an errand for their God.

I thought that the author’s descriptions of what it felt like to be in the presence of the various deities were very authentic. It really brought the story to life as did the scene Dean painted when Corentine and the “package” wound up in the Underworld. I can’t say that I loved every second that I spent reading this novel, but the next installment is due out shortly, and I plan to have a front row seat.

THUNDER ROAD has been crossed off my TBR pile!