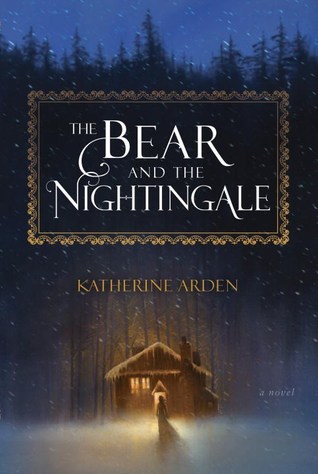 At the edge of the Russian wilderness, winter lasts most of the year and the snowdrifts grow taller than houses. But Vasilisa doesn’t mind—she spends the winter nights huddled around the embers of a fire with her beloved siblings, listening to her nurse’s fairy tales. Above all, she loves the chilling story of Frost, the blue-eyed winter demon, who appears in the frigid night to claim unwary souls. Wise Russians fear him, her nurse says, and honor the spirits of house and yard and forest that protect their homes from evil.

After Vasilisa’s mother dies, her father goes to Moscow and brings home a new wife. Fiercely devout, city-bred, Vasilisa’s new stepmother forbids her family from honoring the household spirits. The family acquiesces, but Vasilisa is frightened, sensing that more hinges upon their rituals than anyone knows.

And indeed, crops begin to fail, evil creatures of the forest creep nearer, and misfortune stalks the village. All the while, Vasilisa’s stepmother grows ever harsher in her determination to groom her rebellious stepdaughter for either marriage or confinement in a convent.

As danger circles, Vasilisa must defy even the people she loves and call on dangerous gifts she has long concealed—this, in order to protect her family from a threat that seems to have stepped from her nurse’s most frightening tales.


I added another new bookshelf to Goodreads: religious nutters

I preface my review with that statement, b/c it’s important that you know exactly how off-putting I find anyone who uses religion as a crutch to excuse their abominable behavior.

Agamemnon sacrificing his daughter to ensure favorable winds as he sails to Troy? Kill him on his own alter. Spanish Inquisitioners torturing anyone not Catholic for the glory of God? Burn them at the stake. The KKK claiming that a darker skin tone is the mark of Cain to justify their prejudice and hate? String them up in their own front yard. #noimnotkidding

And I have to tell you, if it wasn’t for that insufferable jackass Konstantin and the witch-hunting frenzy he worked his congregation into, THE BEAR AND THE NIGHTINGALE would have easily been a 4+ star read.

I loved Vasya and (most of) her family. I was nearly as heartbroken as her father when Sasha left to become a monk. I felt Olga’s frustration and amusement at her younger sister who refused to be tamed. And when that creep Karil made eyes at Vasya, I clenched my fists and ground my teeth along with Alyosha.

More than the characters, I loved the folklore. The house spirits, the nature fae, the pagan gods . . . Vasya’s world was steeped in fantastical creatures. The vodianoy who stole Kolya’s basket of freshly caught fish, the rusalka who agreed to stop drowning men from the village in exchange for friendship and fresh blossoms, and the vazila who taught Vasya to speak to horses are a mere fraction of what Arden’s Rus’ has to offer.

And if the villains in this tale had been limited to an evil stepmother and a dark god, it would’ve been my perfect read.

BUT. Religion. Christianity, to be specific, hellbent on choking the life out of everything not equally Christian, and how is this best accomplished? Fear and intimidation, naturally. Also blame. It’s important to have an unconventional woman at hand, the better to accuse of witchcraft when the opportunity inevitably presents itself. *flares nostrils*

I’m not trying to discredit this tactic as a viable plot device, I’m just explaining my hatred of it. It’s 100% a personal preference, which is why I have zero qualms about recommending THE BEAR AND THE NIGHTINGALE to anyone who interested in reading this type of folklore-influenced fantasy. YES, even those rare individuals who hate religious nutters as much as I do—apparently, this is the first book in a trilogy, and as I’m relatively confident that said issue is resolved, which means the next book has even greater potential for awesome.

Looking forward to it.