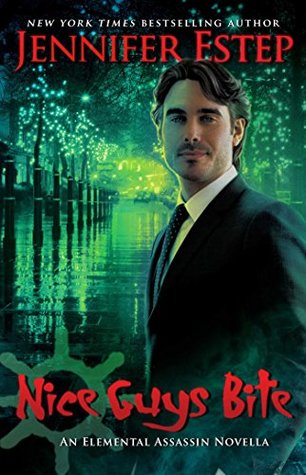 New York Times bestseller Jennifer Estep continues her Elemental Assassin urban fantasy series with a novella starring Silvio Sanchez, the vampire assistant of Gin Blanco, as he goes on a holiday date that turns out to be more deadly than romantic.

Working for Gin Blanco (aka the Spider, the assassin who runs the Ashland underworld) doesn’t leave much time for romance, especially with Gin’s holiday party planning in full swing. But when he catches the eye of a charming gentleman, Silvio finds himself going out for coffee.

All’s fair in love and war, though. Just as Silvio is starting to enjoy himself, he realizes he’s being watched. His nice guy date doesn’t sense the danger, and Silvio wants to keep it that way (and, well, keep the guy alive) so Silvio ends the date early—only to be abducted by some villainous giants.

Will Silvio survive the night and make it back to the Pork Pit in time for Gin’s holiday party? Only if he decks the hall with bodies...


Silvio Sanchez is a fairly recent addition to The Spider clan. He originally stepped onto the scene in BLACK WIDOW, book #12, so I was a little surprised that Jennifer Estep picked him as the next novella candidate over longer standing characters like Bria, Jo-Jo, or Sophia. Although, admittedly readers do already know a great deal about these secondaries given that they’ve been a part of this series longer. My two cents not withstanding, NICE GUYS BITE was full of holiday cheer, and helped to bring Gin’s assistant further into the ELEMENTAL ASSASSIN fold.

It’s no secret that when push comes to shove, Blanco’s sidekicks are more than capable of handling themselves whenever trouble comes a knockin’, and the boss lady isn’t handy with her silverstone knives. Silvio has proved himself to be a proficient paper pusher in his role as aide to Ashland’s Queen of the Underworld, but has yet to be battle tested. What started off as a fun date—bonus points for it being LGBT in nature—quickly went South, and Sanchez demonstrated that he has skills that extend past his efficiency with tablets and smartphones.

I enjoyed the festive Pork Pit inspired decor, and Gin’s holiday feast had my belly rumbling for BBQ after only a couple of deliciously descriptive phrases. There was nothing important to the story arc of the full-length volumes in this short which is exactly how it should be however, like any Estep title, NICE GUYS BITE was still incredibly satisfying.