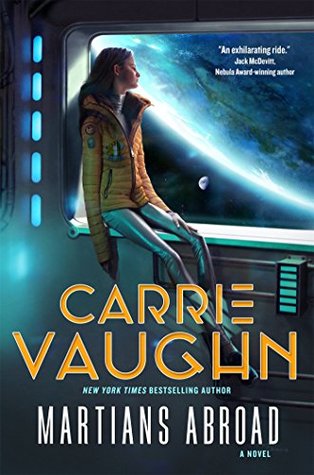 Well known for her Kitty Norville bestselling series, Carrie Vaughn has written Martians Abroad, a novel with great crossover appeal. Polly Newton has one single-minded dream, to be a starship pilot and travel the galaxy. Her mother, the Director of the Mars Colony, derails Polly's plans when she sends Polly and her genius twin brother, Charles, to Galileo Academy on Earth--the one planet Polly has no desire to visit. Ever.

Homesick and cut off from her own plans for her future, Polly cannot seem to fit into the constraints of life on Earth, unlike Charles, who deftly maneuvers around people and sees through their behavior to their true motives. Strange, unexplained, dangerous coincidences centered on their high-profile classmates begin piling up. Charles may be right--there's more going on than would appear, and the stakes are high. With the help of Charles, Polly is determined to find the truth, no matter the cost.

In MARTIANS ABROAD’s version of the future, Mars has four colonies, all set up as independent business ventures. Polly and Charles Newton are the (nominally) twin children of the equivalent of one of Mars’ colonies’ President and/or CEO.

. . . we were uncorked at the same time and grew up together. But I’m really older because my embryo was frozen first. My unique collection of DNA has been in existence in the universe longer than his . . .
But as Charles always pointed out, we’ve been viable human beings for exactly the same amount of time. The seals on our placental canisters were popped at exactly the same moment, and we took our first breaths within seconds of each other. We watched the video twenty times to be sure. I didn’t even have the benefit of being five minutes older like a natural-born twin would. We were twins, exactly the same age. Charles was right. He was
always right.
I would never admit that out loud.

And that pretty much sums up Polly and Charles’ relationship. At least superficially.

Our story begins when Polly and Charles are called their mother (The Supervisor Martha Newton, director of Colony One operations)’s office for a meeting.

Polly wonders what they’ve done to get in trouble (this time), and without spending too much more time in her presence, you begin to understand just how legitimate that line of thinking is.

Polly is what my grandfather would’ve termed a “firecracker.”

A firecracker who plans to begin her internship at the astrodome, in the first of multiple check marks on her way to becoming a spacecraft pilot, in one week’s time.

So Polly-the-firecracker comes close to detonation when her mother (a rather nasty and mercenary individual) informs her and her brother that they will be leaving on the next shuttle to Earth to attend the prestigious Galileo Academy:

“. . . a wonderful school, the best there is. Kids from all over the system go there, and you’ll get to learn and do so many things you’d never have a chance to if you stayed here.”

Charles is . . . Charles. Which is to say, not prone to displays of emotion. Ever. To the point you become concerned that he’s a sociopath and you somehow missed the memo about this book falling under the horror umbrella, b/c this kid is going to slaughter everyone.

SPOILER ALERT: it doesn’t and neither does he. <——a JOKE, not a real spoiler.

When they get there, it becomes clear that everyone from Earth views everyone not-from-Earth as a second-class citizen.

They’re weak b/c they’re born and raised in low gravity. Their bones and muscles are less dense, their frames elongated. Simply walking is exhausting, and that’s after a diet and exercise regimen meant to prepare their bodies for the grav change.

They’re ignorant b/c their education is specific to the needs of their colony/space station, so they don’t learn basic Earth history, b/c who cares about Manhattan-that-was on Mars?

And the Earth elite are pompous little peacocks content to embrace the stereotypes.

It’s soon established that despite their lower bone density, despite their skinny scarecrow frames, despite their discomfort with wide open spaces, it’s the raised-somewhere-not-Earth students who are made of sterner stuff than their arrogant, muscular Earthling counterparts.

And when Polly saves one of their own, the tide begins to turn . . .

That’s all you get. If you want to know more, read the book. *winks*

MARTIANS ABROAD by Carrie Vaughn is relatively short standalone read, and its purpose is more philosophical than is usually found in longer works with an identifiable evil to conquer. It’s goal is to make you question your own ethnocentrism and the accumulation of . . . things. But don’t worry, it never gets preachy. I loved watching Polly and Charles evolve both as individuals and with the other Galileo students as a group, and I’d recommend it to anyone with a materialistic teenager who likes sci-fi lite.