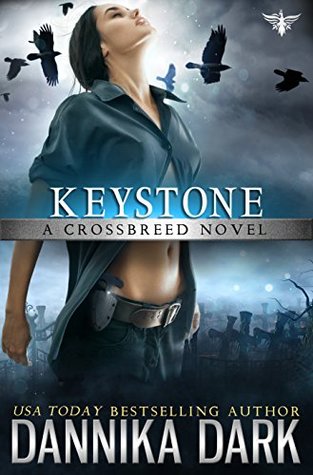 Raven Black hunts evildoers for fun, but her vigilante justice isn't the only reason she's hiding from the law. Half Vampire, half Mage, she's spent years living as a rogue to stay alive. When a Russian Shifter offers her a job in his covert organization hunting outlaws, dignity and a respectable career are finally within her grasp. The catch? Her new partner is Christian Poe - a smug, handsome Vampire whom she'd rather stake than go on a stakeout with.

They're hot on the trail of a human killer who will stop at nothing to get what he wants. One misstep during her probationary period could jeopardize Raven's chance at redemption, and her partner would love nothing more than to see her fail. Will Raven find the courage to succeed, or will she give in to her dark nature?

Dark secrets, unexpected twists, and a blurred line between good and evil will keep you on the edge of your seat.

Whenever Dannika Dark publishes a new book it’s an event for me. Her stories are always full of romance, humor, suspense, and all sorts of paranormal characters. Perfect recipe for a good time reading! With Keystone, the author continues her foray into her intricately fleshed out Breed world, and introduces us to a half Mage, half Vampire, crossbreed named, Raven Black. And for the Mageri fans out there, she has added Christian Poe from that series, into the mix as a major character.

Raven is what is known as a rogue. She is undocumented as far as the Mage world is concerned and wants nothing to do with the vampire side of her heritage. Since she has no standing in the Breed world she can’t work, so she has to scrounge for meals and shelter. She is making it her business to take out the worst of the worst Breed criminals. She gets nothing but the satisfaction of taking one more bad guy out of the world. She has no idea that she is making waves with the criminal element in the breed world. When she is approached by an underground group named, Keystone, to come work with them, she jumps at the chance to finally have a home and get paid for what she already does.

Raven is already a good character. She is so real, flawed, but down deep a good person. She’s got snark and a bit of an attitude, and at times she isn’t the best at taking orders. She’s been a rogue for a long time. Now it’s time for her to learn to play well with others. Will that happen? I can’t wait to see how all that goes as the series progresses. Christian is a member of Keystone and a vampire. He was enigmatic, with a side of bad boy in the Mageri series, but with this book, we see another side of him. Oh, he still has his mysteries, but we do get to see a different Christian. This Christian is more than a little attracted to Raven, and she to him, but he doesn’t believe that he has a capacity to love. Wouldn’t matter anyway, as they are not allowed to be together due to the Keystone rules. There’s also interesting and finely drawn peripheral characters that were part of the Keystone group and I enjoyed getting to know them as well.

I am not going to go any farther into the story due to spoilers. I will say that this book is full of life and death moments and plenty of action. To me, the pacing was pretty perfect and the writing outstanding, as always with this authors work. The action was balanced with the moments of Raven going through the whirlwind of finding a new life. And possibly the chance for a bit of romance with Christian? Only time will tell. I am already chomping at the bit for the next book.

The author has told us to expect twists and turns in this series and I can’t wait to see where it’s all going. I have a feeling it’s going to be quite the ride and I am excited about the whole thing.

Highly recommended to adult urban fantasy, and paranormal romance readers may enjoy this as well.