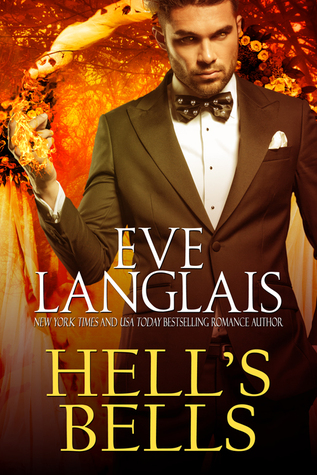 A catastrophe has befallen Hell. The great and mighty Lucifer has fallen prey to the most wicked of spells. He’s become…nice.

Just using that word makes Gaia want to gag. The demon she fell in love with is not some pushover, polite, candy-ass, nice guy. She wants her big, bad Lord of Sin back.

Can she, along with the minions of Hell, find a way to break the curse? And will they do it in time to celebrate the wedding from Hell?

This is a series that I’ve loved for a while. I first met Lucifer back in 2011 when I read Lucifer’s Daughter in the Princess of Hell series. Once I started reading the Welcome to Hell series, my love of Lucifer only grew. In this series, Lucifer plays matchmaker between the demons, witches, shifters and more that he rules over in Hell. Now Lucifer is finally getting a book of his own. YAY!!

So this story starts not long after Hell’s Geek. Ursula, Poseidon’s ex-wife and a former lover of Lucifer, shows up. She’s put a curse on the King of Hell. He’s now nice (ugh). He is no longer trying to debauch the love of his life, Gaia. He’s planning on marrying her. And, he can’t have sex before their wedding night. This is not the man that Gaia wants to marry. So, she, with the help of many of Lucifer’s minions, have a plan to bring the old Lucifer back.

This is a really fun story. I loved the time that we get to spend with Lucifer, even if he isn’t himself. I think it was even more funny to see a nice Lucifer. Plus, you also have the thoughts in his head. The bad part of himself is there and argues with the nice Lucifer. There are also several of the other characters we’ve met along the way, though they all have pretty small parts.

Each chapter opens with a tweet from @GaiaLuc4Ever. These tweets were hilarious. The only thing that I would fault in the tweets are that both Gaia and Lucifer are both using this account. I felt that they should’ve each had their own account. Minor thing really, but it was something that I noticed.

@GaiaLuc4ever: 5 days until I get to see my beautiful bride walk down the aisle. #soexcited #squeeeeeee

@GaiaLuc4ever: Getting close to the journey’s end and have yet to kill irritatingly polite devil. #couldchangemymind #rideisnotdone

Each chapter also ends with a new hashtag. These were great,too. They each sorta summed up the feelling of each chapter.

As per usual with any Eve Langlais book I read. I end up with a ton of highlighted parts that I might want to include in the review. She has so many great little LOL moments, it is really hard to not put like tons of quotes, but then you wouldn’t need to read the book, so I try to limit them. Also, sometimes the quotes are spoilers, too, and we wouldn’t want to do that. I usually pick quotes from earlier in the book for that exact reason.

How Gaia missed the way Lucifer ate her pie. The new Mr. Manners hadn’t touched her since their party, claiming he was saving himself for their wedding night. Here she dated the biggest manwhore in all of Hell, and she couldn’t get any action. Meanwhile, she was out of fresh and firm cucumbers.
Don’t judge. Organic was all the craze these days, plus she was allergic to most rubbers and latex.

“You’re wearing pink pastel slacks and a Hawaiian shirt with pineapples.”
“I know. Utterly amazing.” He peeked down at his ensemble. “I know it’s a sin to have pride, but it’s a bigger sin to lie and say that I don’t look dashing.”
“I miss your penguin suspenders and your evil shark tie.”