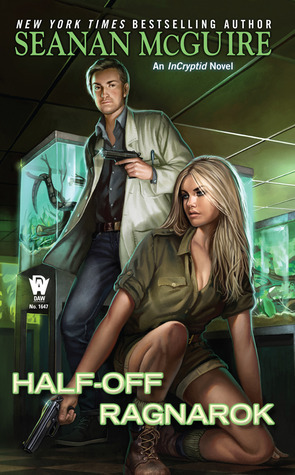 When Alex Price agreed to go to Ohio to oversee a basilisk breeding program and assist in the recovery of his psychic cousin, he didn't expect people to start dropping dead. But bodies are cropping up at the zoo where he works, and his girlfriend—Shelby Tanner, an Australian zoologist with a fondness for big cats—is starting to get suspicious.

Worse yet, the bodies have all been turned partially to stone...

The third book in the InCryptid series takes us to a new location and a new member of the family, as Alex tries to balance life, work, and the strong desire not to become a piece of garden statuary. Old friends and new are on the scene, and danger lurks around every corner.

Of course, so do the talking mice.


I’m not going to lie, I was initially put off by the POV shift from Verity to her brother Alex. Verity is the quintessential urban fantasy heroine that I’ve come to know and love, and if it isn’t Verity, I’d be much happier if it was Antimony (my favorite roller derby goddess, thank you freebie short stories available on McGuire’s website).

Alex like snakes, disparaging his sisters, and not much else as far as I can tell.

“You really tried to hug a manticore? Alex, I never thought you had it in you.”
“I was six,” I said, trying to recover my dignity as I put the Tim Horton’s bag down on the table. “It looked like a puppy crossed with a scorpion. Of course I wanted to hug it.”

Is Alex as kick-ass as Verity? No. Is he as unapologetically scary as Antimony? No. Is he as big of a stick-in-the-mud science geek as I believed he was . . .?

Well yes, actually, but as it turns out stick-in-the-mud science geeks are kind of fun.

Especially when he’s mooning over a pretty Australian girl who is almost as awesome as his sisters.

Less fun is that I pegged the bad guy the second he was introduced. You know how it normally goes: at some point early in a book you meet the Bad Guy in such a way that in hindsight you’re all, ooohhh yeahhhhh, that totally makes sense.

Except this time I didn’t need hindsight.

Dude was introduced, and I was like, I bet he’s a ________! Then a chapter or so later the first Bad Thing happens, and guess what? The thing I guessed dude to be can do the Bad Thing.

Ta-dahhhh. *does not throw confetti in the air* *does not moonwalk* * does not shake booty*

Back on the fun side is this series’ version of not-a-cat, Alex’s pet some-kind-of-griffin, Crow. Crow is every bit as adorable as October’s rose goblin, Spike. Also fun is the Australian version of this animal, allegedly covered in pink stripey fur, the garinna.

SO. Not my favorite installment of INCRYPTID, but not bad either. Sarah is alternately heartbreaking and hilarious as she travels the apparently slow road to recovery, Alex is twitterpated by a visiting zoologist (or is she?), and while I’ll never be fond of snakes, I’m down with giant-turtles-as-body-dumps, and flying bird-cats are excellent . . . I’m still kicking myself for waiting so long to get caught up with this series. Highly recommended.