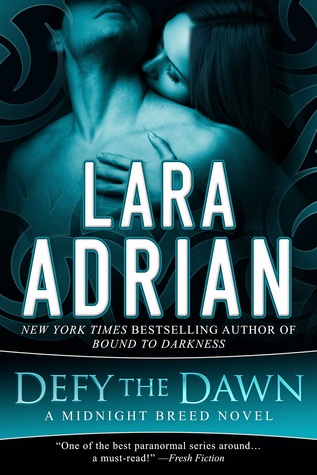 Daywalker Brynne Kirkland survived a hellish upbringing as a product of a madman's lab. Tough, driven, and devoted to her work in law enforcement, Brynne has never dared to risk opening her heart to anyone-least of all a handsome immortal from a world on the verge of war against hers. Atlantean warrior Zael left the intrigue of his realm several lifetimes ago, along with the battles he fought as one of the queen's legion. As a free-spirited loner walking the fringe of two worlds-that of his secretive and powerful people, and the outside world belonging to mankind and the Breed-it was never his intention to return to combat and bloodshed. Nor had he imagined that he might ever be tempted into anything stronger than desire . . . until he meets Brynne. Thrust together as allies of the Order in the fight against a diabolical enemy, Zael and Brynne embark on a mission that will ultimately force them to decide between duty to their people, and a passion that defies all bounds.

Book 14 of the Midnight Breed books, Defy the Dawn, tells Brynne Kirkland’s story and what happens when she finds herself drawn to Atlantean warrior, Zael. Brynne is a daywalker in the world of the Breed, a vampire like race. She was working in London for JUSTIS, a law enforcement agency for Breed and Human interactions. When an attack pretty much levels the building that houses her work-a work she was just let go from that very day, she relocates to the U.S., and to the Order. The Order fights against an evil terrorist group named, Opus Nostrum. As the Order is pretty much responsible for the loss of her job due to her secret work for them, they welcome her. Also on hand at The Order headquarters, Zael is pretty determined to get Brynne in his life. What he doesn’t know is that she has a pretty horrific secret-one that keeps her out of any relationship longer than a one night stand.

This has always been a favorite series of mine. I read the first ten books, back to back, because I couldn’t put them down. Along the way, the author changed things up in a big way and twenty years pass in the series leaving the children of the original characters to now be main characters. Of course, they aren’t all children of the originals, but some are. Starting with book 11, everything is now different and while I liked that book(Edge of Dawn), the first ten books are still my favorites of the series. Back in the beginning these warriors were a secret organization, and humankind knew nothing of their existence. Now that’s all changed, and with the main characters of the first ten now regulated to peripheral character status, I am not as happy with the series as I was previously. I do still like the series, it’s just different-in just about every way possible. The addition of an Atlantean in a previous book was a welcome change for me, so I was happy to see that Zael was getting his book, and it hasn’t even been that long of a wait.

This ended up being a good paranormal romance, but to be honest, I was more interested in Zael’s back story and his people. The reader gets to meet a lot more of the Atlantean’s and visit their earth home, one that is shrouded in secrecy. Zael is the only one that is trusted to go back and forth between the Atlantean home and “real life.” Adrian’s depiction of what it would be like if Atlanteans still existed was interesting and well imagined. Another thing that was fascinating about this read was Brynne’s secret and the back story about how that came to be-something I am not even touching on, due to spoilers.

I know I haven’t told a lot about the actual story and that’s on purpose. It was a good read, with some suspense, and lots of romance. You don’t absolutely have to read the others that came before this, but I highly recommend them-especially important in truly understanding Brynne’s problem. This is an adult read due to sensual scenes and violence.