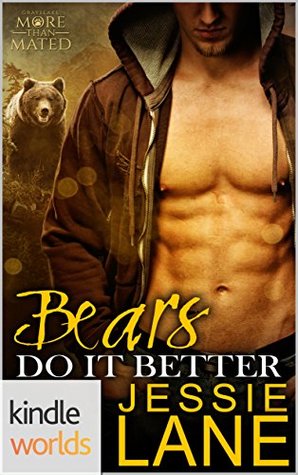 Misha falls in lust at first sight with the big, sexy bear shifter, but she doesn't have time for his mating nonsense. Raised in Russia by tiger shifters, she came to America to follow up on her first real lead for finding her biological family.

Borys wants the smokin’ hot bear who recently wandered into town. Now all he has to do is convince Misha that she’s meant to be his. The stubborn woman won’t give him the time of day, though, saying she’s looking for her kin.

His biggest problem? He might be the family she's looking for.

This is a short story that is written in the world of Grayslake series, originally written by Celia Kyle. It was a series that I really loved. The series is full of snark, romance, and some tough topics, but in a way that I found very fun. I wasn’t sure what I would think about additional books in this world written by authors that I’m not familiar with. This is my second book to read from an author besides Kyle.

I’ve never read Jessie Lane before starting this story. It is a short story, so I don’t get the full depth of her writing. This story was a cute one, but I didn’t enjoy it as much as the first one I read. The characters in this story aren’t very complex. But that doesn’t mean that I don’t like them.

The character that I liked the most was Misha’s “aunt”. Misha is a bear that was raised by tigers. The tigers found a young shifter bear cub in a traveling circus in Russia. They rescued the bear and raised her as their own. Misha comes back to Grayslake, Georgia to find some of her biological family. They’re assuming that her parents were killed by the circus.

The big thing that got to me was the instalove (quick even for fated mates story). Borys no sooner steps on the same property as Misha and he’s running head long for her. Also, he said that she smelled like cookies and kept calling her that. Now, don’t get me wrong, I love cookies, but I would never barrel through a group of people and climb a tree saying “cookie, cookie, cookie” the entire time. He kinda reminded me of the Cookie Monster.

Anyway, it was a cute story. The aunt had some really great lines, even if she did have a hard time with the English language (her sentence structure tended to be way off). I would love to learn a lot more about her. Lastly, I think ever famous bear from cartoons is mentioned. Yogi, Boo-Boo, Winnie-the-Pooh, Baloo. They are all used at some point in this story.

This was his day off after working overtime with the lawn care business he owned. He wanted to lay around, watch things blow up on the television, and be lazy for the rest of the day, which was why he decided that the next idiot who knocked on his door and interrupted his day of hibernation was going to end up with a bucket of fertilizer over their head.

Of course Auntie Arina took the choice right out of her hands when she asked the oversized male leader, “You bears eat a lot of these honey rolls? Like that Pooh of the Winnie with his head stuck in the honey pot?”

24 responses to “Review: Bears Do It Better by Jessie Lane (@mlsimmons, @JessieLaneBooks, @celiakyle)”