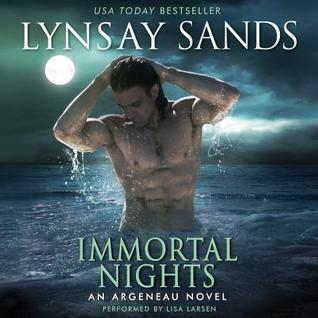 In a sizzling new Argeneau novel from New York Times best-selling author Lynsay Sands, an impulsive rescue pairs a sexy immortal with the woman made to be his for eternity.

Abigail Forsythe's life hasn't been easy lately. Still, if there's one thing guaranteed to take her mind off an empty bank account and abandoned dreams, it's a naked man locked in a plane's cargo hold. A very big, incredibly gorgeous naked man. And when instinct prompts her to free him, Abigail must rely on this stranger for survival - a stranger who leaves her thrumming with need every time they touch.

Tomasso Notte knows he's found his life mate in Abigail. Now he just has to hold on to her. They're miles from civilization, hunted by his kidnappers. Abigail has no idea of Tomasso's abilities or of how intensely pleasurable their unique connection can be. But he's about to show her, beginning with one wild, hot, immortal night.

A few months ago I decided to bite the bullet and try the Argeneau Series by Lynsay Sands. By that I mean, it’s really hard to begin a series that has so many books already, but I did. And I ended up really happy that I had done so. Starting this far in didn’t bother me at all, although between book 23, Runaway Vampire, and this one, I did read book 2 to get some background. I also have book 1 in my tbr stack. Yes, I know I read them out of order. I was never confused, so that was a plus. This book really does go hand in hand with Runaway Vampire because Italian twins Dante and Tomasso were kidnapped in that one. That book ended up being Dante’s story after he escapes. This book is what happens to Tomasso.

Abigail is an mildly overweight medical school drop out due to sedentary time spent nursing her mother through her cancer. Now alone in the world except for her best friend Jet, she goes to visit him. Jet is a new cargo plane pilot and he decides to take Abigail with him on a flight to South America so they can spend some time together away from it all. So she secretly boards a flight that has some criminal types along for the ride. When she finds that she’s in the cargo hold with a barred cell holding an unconscious, chained, and nude man, she decides she needs to help, especially when she realizes that the man is a kidnap victim. What she doesn’t realize is that Tomasso is a vampire.

The author has given these vampires their own world building and this group lives in Toronto and works with their own corporation, most of the time. They are immortal and must drink blood through their fangs-from bags. When someone is turned to vampire, they end up being a pretty much their perfect self as far at looks. Old? You’re young again. Overweight? Not anymore. In addition, there’s an interesting backstory about how these vampires came to be. I also think that Abigail’s character is nicely drawn by the author and she was my favorite of the book. She gave up becoming a doctor in order to take care of her mother and used all of her college fund to pay off her mothers medical bills. And she ended up in some crazy situations thanks to Tomasso. Tomasso is very handsome and very Italian. He is a strong man, one that works for the Argeneau Corporation, and he loves with all his heart-once he meets his mate in Abigail.

I listened instead of read this book.I thought the voices were done well and the narration by Lisa Larsen kept me listening. I enjoyed the whole thing which I am sure is at least partially due to her excellent narration, although I am really loving all these books by Lynsay Sands. I would definitely be up to for listening to anything else she narrates.

This was pretty much a thrill ride for a large portion of the read. Whether they are escaping from the villains in an unusual manner, or being stalked by the villains, this book kept me listening pretty much non-stop. There’s plenty of murder and mayhem to be had, along with a dose of sexy times. This is one I would recommend to all adult paranormal romance readers, especially ones that enjoy a suspenseful story.