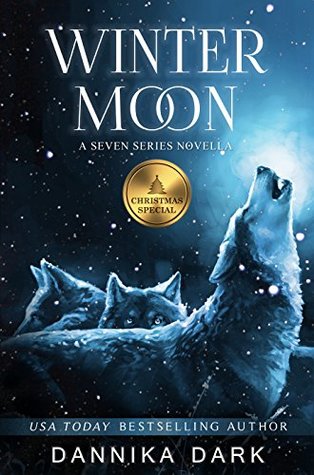 The Weston pack waited until the last minute to prepare for Christmas. Spirits are low, and now they're in a scramble when a freak snowstorm knocks out the power. Despite bickering among packmates and the threat of rogues, the family is determined to make this a memorable Christmas.

But when an important family member goes missing, the pack is galvanized into action. Time is running out, and the temperature is dropping fast.

Winter Moon is a bonus novella that takes place after the final book in the series, One Second.

The Seven series by Dannika Dark is a wonderful series full of romance, family, suspense, and heartwarming moments, all surrounding a family of wolf shifters. It recently ended with the book, One second, and all her fans, me included, were not ready to say goodbye. Now the author has gifted us with a novella featuring this family of brothers and their mates. I say gifted because that’s what this novella is, a gift.

It’s Christmas Eve and there’s a snow storm going on at the Cole Pack home. Not too far in to the story the power goes out, so they are faced with Christmas dinner being ruined, and the only heat source being one fireplace in a huge two story home. The blurb warns us that someone is going to be missing(not killed), so I tried guessing all the way through about who it was going to be. And there were plenty to choose from.

All the characters are back, including characters that were featured in other books, but weren’t part of the brothers. I have two favorite brothers, Reno, the tough motorcycle riding private eye/bounty hunter-tough but with a heart of gold, now mated to April, and Denny, a bartender at the local shifter bar, now mated to Maizy. Other characters include packmaster Austin and his mate, Lexi(Maizy’s sister), local rock singer Jericho and his mate Izzy, among others. Favorite couple from this particular book was fairly newly mated, Trevor and William. It took them forever it seems, but now they are together and seriously cute together. Lakota, a newer character, and not a brother, was my favorite character this time. If you love this series or Dark’s Mageri Series, then you know why.

Each chapter follows either a couple, or a small group, and shows what’s going on with them during the snowstorm. Everyone is involved in different pursuits, so it does keep you guessing about what’s finally going to happen. What I liked the most was just catching up with the characters. There’s a new(er) baby in the family, some of the older teenagers are getting closer to adulthood, and the couples that have been together awhile are still romancing each other or even actively sneaking off for some quality alone time.

So much humor is evident this time(and really in all of the books) and I appreciated that. No spoilers, but Denny and his brother Wheeler’s adventure while looking for a Christmas tree was especially fun. I have been so invested in this series since book one and now all the characters are like old friends. While wolf shifter romances are a dime a dozen everywhere you look, this series in no way falls into that category. These characters have all been fully realized by the author, the romances have all been portrayed in a real manner and not all hearts and flowers, or love at first sight either. The mysteries or suspense/action is well thought out and executed, and these books have had me on the edge of my seat more times than I can count. Dark is truly a wonderful writer, and one that I urge everyone to try.

The only downside I see to this book is that I wish it was three times as long! Highly recommended to adult paranormal romance readers.