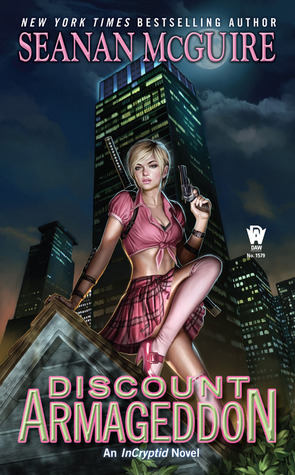 Ghoulies. Ghosties. Long-legged beasties. Things that go bump in the night... The Price family has spent generations studying the monsters of the world, working to protect them from humanity—and humanity from them. Enter Verity Price. Despite being trained from birth as a cryptozoologist, she'd rather dance a tango than tangle with a demon, and is spending a year in Manhattan while she pursues her career in professional ballroom dance. Sounds pretty simple, right? It would be, if it weren't for the talking mice, the telepathic mathematicians, the asbestos supermodels, and the trained monster-hunter sent by the Price family's old enemies, the Covenant of St. George. When a Price girl meets a Covenant boy, high stakes, high heels, and a lot of collateral damage are almost guaranteed. To complicate matters further, local cryptids are disappearing, strange lizard-men are appearing in the sewers, and someone's spreading rumors about a dragon sleeping underneath the city...

I read DISCOUNT ARMAGEDDON over four and a half years ago when it was first released, and all I can say in regards to why I’m only just now getting back to it is . . . It was a casualty of Mt. TBR.

And I am ashamed.

B/c seriously, guys, this book screams, “JESSICA! I AM HERE FOR YOUUUUU!”

No, really. It does.

We all know that Fae are my favorite, and that Native American folklore is #2, but what doesn’t come up very often is any random creature fest. This is b/c most random creatures fall under the “Fae” umbrella, BUT on the rare occasion that they don’t, they fall under the cryptozoology umbrella.

You: Cryptozoology? What’s that?

Me: Cryptozoology is a pseudoscience with the goal of identifying and describing beings from the folklore and the fossil record, which cryptozoologists refer to as cryptids. These include creatures that are otherwise considered extinct or beings from folklore, such as Bigfoot and chupacabras.

Sanctuary was one of dumbest shows Syfy ever produced, but I watched every episode of every season, b/c CREATURES.

But that’s just the beginning.

Verity is the eldest daughter in the most recent batch of Prices, a family that split from the Covenant (an organization of monster hunters), b/c DAMN THE MAN.

Okay, so it’s more complicated than that.

The Covenant indoctrinates their followers that all non-human creatures are evil and must be eradicated, but the Prices started to question that philosophy. Then, when Mr. Price discovered that the latest (and worst) outbreak of cholera was the direct result of killing the last local unicorn (b/c they purify the water in their habitat), they said, DAMN THE MAN, and headed to ‘MERICA.

Verity takes the familial attitude one step further and augments her monster killing/wrangling skills with . . . wait for it . . . ballroom dancing. B/c DANCE, she loves it. And dammit, she’s determined to find a way to do both. At least while she’s young.

So we’ve got a monster-wrangling, sass-throwing, ballroom-dancing heroine with a problem with authority . . . And really, do you need anything else?

But if you’re contrary, there’s also a Covenant noob who gets schooled on reality, (adorable) technicolor mice who can (and will) turn anything into a religious celebration, the best pre-chapter quotes I’ve ever read, and a variety of cryptids who make awesome requests like, “Mayhem now, please.”