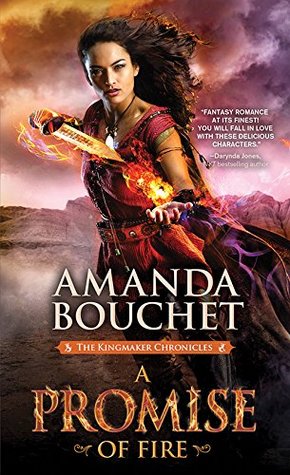 KINGDOMS WILL RISE AND FALL FOR HER…

“Cat” Catalia Fisa lives disguised as a soothsayer in a traveling circus. She is perfectly content avoiding the danger and destiny the Gods—and her homicidal mother—have saddled her with. That is, until Griffin, an ambitious warlord from the magic-deprived south, fixes her with his steely gaze and upsets her illusion of safety forever.

BUT NOT IF SHE CAN HELP IT

Griffin knows Cat is the Kingmaker, the woman who divines the truth through lies. He wants her as a powerful weapon for his newly conquered realm—until he realizes he wants her for much more than her magic. Cat fights him at every turn, but Griffin’s fairness, loyalty, and smoldering advances make him increasingly hard to resist and leave her wondering if life really does have to be short, and lived alone.

I received an ARC of A PROMISE OF FIRE early in the year, and I was excited about it too, b/c fantasy romance, I love it. And it’s rare. So new author, new series, hell yes, I will board that train.

Then I started reading it.

1. First person, present tense. Which I HATE. It’s my least favorite perspective to read from.

2. Poseidon. What in the Sam Hill is Poseidon doing in a fantasy world, I ask you? Hmm??

The second is admittedly one of my weird quirks that probably won’t bother the rest of you, but it irks the fire out of me when real world people or religions (or, you know, other stuff) show up in high fantasy and/or make believe worlds. You can have Middle Earth or you can have Hinduism, and never the twain shall meet. #jessicasrules

Borrowing a real world religion is the tactic of a lazy author to avoid creating her own. Also, it breaks continuity.

Long story short, I DNF-ed it at probably less than 5% and hadn’t thought about it since . . . Until the Best Books of 2016 lists start coming out, and it’s on like four of them.

It’s somewhere in the middle, I think.

Bouchet has created in her heroine, a womanchild who is occasionally hilarious, frequently courageous, and repeatedly irritating—Cat is as stubborn as she is inconstant.

Think about that for a second. Stubborn . . . yet inconstant.

If I’d encountered that description pre-Cat, I’d have been at a loss to imagine what it looks like. BUT. This is post-Cat, so it’s not a problem. Context: I will tell you ALL THE THINGS! B/c ANGRY! Even though it’s dangerous for me to do so! *hiss* *spit*

This happens A LOT. Unsurprisingly, the source of much of Cat’s inconsistency is her immaturity. By the midway point, Griffin (who is NOT a manboy, no siree, he is all MAN), has kissed her either two or three times, and each time she’s swooned, until she “comes to her senses,” which entails violence in the form or hitting or kicking, followed by angry exclamations of “Yuck!” or “Gross!” And that’s only the beginning of Cat’s juvenile behavior.

The trouble is that she’s also entertaining as hell. And the plot, once I got past the presence of the Greek pantheon, is equally entertaining.

That being said, no one will be surprised that this is Bouchet’s first novel. Her non-magic population is called the “Hoi Polloi.” YES, as in the unwashed masses, and she needs to embrace her genre for what it is—when someone narrows their eyes, it is not an “ocular threat” (*rolls eyes*). BUT. She shows clear promise, and I’m interested to see where the next installment takes us.

SO. Not really comfortable making a recommendation just yet . . . Do what you will. *shrugs awkwardly*

6 responses to “Review (and Squawk): A Promise of Fire by Amanda Bouchet”