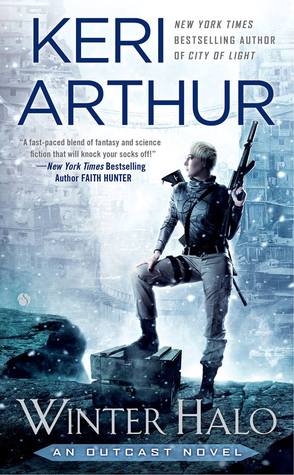 From the New York Times bestselling author of the Souls of Fire novels comes the second in the futuristic fantasy series that will make you want to keep the lights on...

When the bombs that stopped the species war tore holes in the veil between worlds, they allowed entry to the Others. Now, a hundred years later, humans and shifters alike live in artificially lit cities designed to keep the darkness at bay....

The humanoid supersoldiers known as the déchet were almost eradicated by the war. Ever since, Tiger has tried to live her life in peace in hiding. But in the wake of her discovery that Central City’s children are being kidnapped and experimented on, Tiger’s conscience won’t let her look the other way.

The key to saving them lies within the walls of a pharmaceutical company called Winter Halo. But as she learns more about the facility, Tiger’s mission is derailed by a complication: Winter Halo’s female security guards are being systematically attacked by an unknown force.

Now Tiger must summon all her gifts to stop those responsible for both atrocities—no matter the cost to herself...


CITY OF LIGHT rekindled my love affair with Keri Arthur, and even though WINTER HALO didn’t leave me in awe like book 1, it was on the cusp of being 5-stars. Saving Central’s children is still Tiger’s priority only now things have gotten a lot more complicated because the enemy knows who she is, and what she can do. The ante’s been raised, as have her feelings for Jonas. The OUTCAST series is heating up in more ways than one!

Having already established the world in the previous installment, the attention shifted to the characters which couldn’t have come at a better time because the secondaries were what I’d felt the most unsure of at the end of the last novel. I wouldn’t go so far as to call Nuri and Jonas allies yet, but we do gain some clarity on their cause, and on them as individuals. And, that left me on improved terms with them going into the next volume.

The plot didn’t revolve around the children as much as I’d expected, although some headway was made in that area as well. What’s been going on behind closed doors at the pharmaceutical company run by Sal’s partners was at the forefront however, given that the kids are being experimented on, there were quite a few parallels between the two threads. The events leading up to the resolution were straightforward as far as Urban Fantasy story lines go.

Tig made good use of all her talents as a déchet, but the author zoomed-in on her ability with ghosts which allowed readers to connect with Bear & Cat on a deeper level. These two little specters are adorable! Jonas seems to be ready to acknowledge his attraction to the heroine however, these two still have a long way to go if they want to have some semblance of a romantic relationship. The slow burn is a nice change of pace from this author’s usual M.O.

WINTER HALO was another grand slam by Keri Arthur!