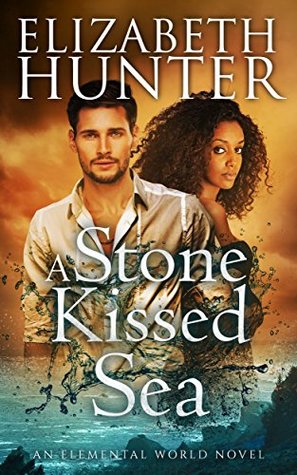 An immortal wanderer. A brilliant scientist. A centuries-old menace written in blood.

Lucien Thrax, son of the earth and child of the ancients, is a healer of immense power. But years of work on a deadly vampire virus have not led to a cure, nor have they softened the wall he built around his heart. When he’s forced to work with Doctor Makeda Abel, Lucien is convinced he’s reached his limit of patience with humanity.

Makeda Abel may be human, but she’s far from impressed with the brooding vampire healer, even if his mind draws her reluctant admiration. She’s learned how to survive in the immortal world, and it’s not by being afraid. Working together may lead them to answers, but it also pushes Lucien and Makeda’s attraction to the boiling point.

When nightmares become reality, Makeda will have to trust Lucien with her life. Finding answers has never been more vital. Finding love has never been more deadly. To heal the Elemental World, Lucien and Makeda must follow ancient paths and ask for help from the most inhuman of immortals. Because even with a cure in hand, the battle has only begun.


The Elixir virus is still plaguing both human and immortal populations when the latest installment of Hunter’s ELEMENTAL WORLD series begins, but this time we’re focused on finding a cure (for vampires without a living sire) for the disease.

To that end, one of the first vampires we met who was suffering the effects of the virus, Lucien Thrax, son of Saba (perhaps the very first vampire), is recruited to head the team of scientists selected to study the virus and determine a course of treatment.

Three years later, all but one of the infected humans in his care have died, and though he’s created a reliable test to reveal those afflicted, he is no closer to creating a cure than when he began.

Enter physician and researcher Makeda Abel, a human who specializes in blood disorders . . .

I feel like I say this every time I review a new Hunter installment, but I don’t read much paranormal romance—I can count on one hand the PNR series I make an effort to keep current with. I enjoy romance, but it’s always been secondary to an action-focused plot, so my one complaint is that for the first half of the book, I felt the romance overshadowed the main plot.

The need to find a cure for the Elixir virus was present, but it took a backseat to Lucien and Makeda’s antagonistic relationship. Similarly, I felt Makeda’s View Spoiler »turning—against her will, no less—was made inconsequential by the FEELINGS both she and Lucien were trying to reconcile. « Hide Spoiler

And considering how great the characters were, I couldn’t help but be somewhat disappointed, b/c they were capable of being so much more than their HEA.

Just past the midway point, the plot expanded, and the complexities I’ve come to expect from a one of Hunter’s series were present and accounted for.

Whatever. Just past the midway point, Lucien and Makeda get out of the lab/off the isolated island, and begin planning the permanent demise of the Bad Guys responsible for perpetuating the Elixir situation, and I no longer had cause to complain about a lack of action.

How does it end?

Read it yourself and find out.

I will say that A STONE-KISSED SEA draws this storyarc to a conclusion, opening the door wide for the next chapter in the lives of the characters inhabiting this world that we’ve come to love. Whether that means we should brace for the alluded to Ben/Tenzin spinoff (full-length novels??) or something else entirely, your guess is as good as mine . . . BUT. A girl can hope. *waves Ben/Tenzin flag* Regardless, I highly recommend you acquaint yourself with what Hunter has to offer now.