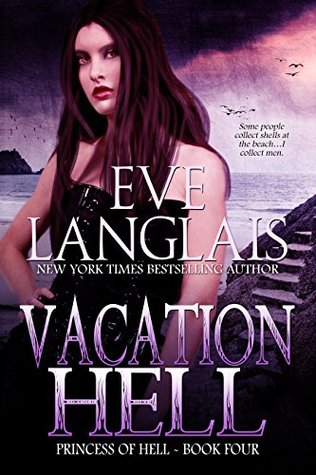 Juggling a happily ever after is harder than it looks especially when it involves a fallen angel who is my soul mate, a hunky cat shifter, who stole my heart and a darkly delicious vampire who is like that piece of forbidden chocolate you just can’t resist.

Add in a precocious little girl, who is totally spoiled rotten—not surprising given nana and poppa were Mother Earth and the Devil—and my life was a never ending series of dramas, foot stomping, yelling and tears. By me.

I never knew being a grown up could be so much damned work which is why I decided we needed a vacation. But of course, being Lucifer’s daughter, that didn’t turn out as expected. Now I’ve go to figure out if my bathtub is big enough for a hunky merman—and is there room in my heart for one more?

This was the series that introduced me to Eve Langlais. When I saw a book about a rebellious daughter of Lucifer (rebellious in that she got straight A’s in school and was still a virgin, LOL), I decided I have to try it. It was also the first book I read as an ebook on my phone because I couldn’t find it in print anywhere. The rest is history. Eve Langlais is now a favorite author of mine. If I’m ever in the mood for a book that will make me laugh, I she is one of my top go-to’s for something to make me chuckle out loud.

In this book, Muriel (said daughter of Lucifer) seems to be getting drawn to water. They all decide that a trip to her father’s seaside villa on the side of the Darkling Sea in Lucifer’s dominion. When I say all, I mean Muriel, Auric (her first lover, an fallen angel and one of the father’s to Muriel’s daughter Lucinda), David (a catshifter, Muriel’s second lover, Auric’s best friend, the second father of Lucinda), Teivel (a vampire and Muriel’s third lover) and of course the daughter would go on this vacation too.

So they travel to the beach. Nothing turns out as it seems. It never does with Muriel is involved. She ends up in Atlantis with Poseidon’s son, Tristan. It seems that when Muriel’s power decides she needs more power, it draws another man toward her. She is a succubus, so she gets more powerful the more sex she has. She gets an even bigger powerboost if she is with multiple men at one time.

While I enjoyed this book, the humor is as good as ever, I didn’t feel like there was a great story in this part of the series. I also feel sorry for poor Auric who has to add yet another man into Muriel’s life. Well, and the other men too. Even poor Muriel doesn’t have anytime for herself anymore (I guess any mother with a young child would agree with this, even if they only have one man). Lucinda and Lucifer really steal the show in this book. It is a great build up to Hell’s Bell (Lucifer is finally getting his own book, *SQUEE*). This story also takes place during the same chronological time frame as Hell’s Kitty (from the Welcome to Hell series, which is a spinoff PNR series. You can read one without the other). So there are some scenes that will match up between the two books.

Even though this isn’t my favorite book in the series. I really enjoyed it. I always have a good time when Lucifer is involved. The snark in this series does make me laugh out loud and often. While you could probably read this book without having read the earlier books in the series, I think you will have a better appreciation for the characters if you start with book one and see how they came together and have grown throughout the series.

The biggest eyes, graved with thick lashes, set in a face highlighted by chubby cheeks and framed by golden hair pinned in pigtails peeked at me. “My, Mommy. DO you like my drawing?”
Must. Resist. The cuteness.
I held firm. No wavering. “Baby girl, you cannot write on the walls.”
“Why?”
A word I truly had begun to hate. “Because I just had them painted.”
“But they’re boring. I made them pretty.” She blinked her ridiculously thick and natural eyelashes at me to no avail. I had been raised in the pit. Her guileless expression did not fool me.
“The walls are supposed to be boring and marker free.” After the chaos of Hell, and even everyday life, I enjoyed a home with a simple color palette. Loves of whites and grays, as well as soft blues. No reads or browns or that weird in-between umber here.
“Can I draw on the ceiling then? Poppa’s palace has pictures on his.”
Poppa’s palace had many things etched into his ceiling, some of them quite inappropriate for little girl’s eyes—and even adult ones, too.

No one had ever explained that being a grownup meant so much damned work—and paint and Lysol wipes and Tide-to-Go sticks—which is why I decided we needed a vacation.

Thrusting his shoulders back in pride, Lucifer offered a shining white smile as he showed off his latest fashion sensation. “Yes, Do you like it?”
“Only you could hope to carry it off,” I replied. And it was true. Only my father could hope to wear a slicker sporting horned ducks and still project that majestic air that screamed, ‘piss me off and I will roast your toes and eat them with some cheese and crakers’. I was more of a rib kind of girl.