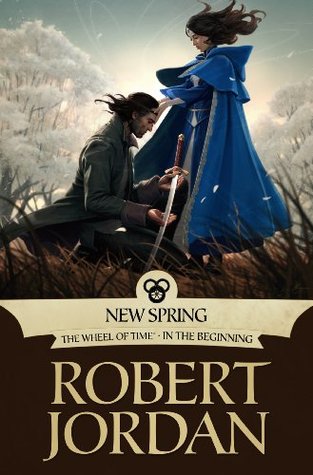 The city of Canluum lies close to the scarred and desolate wastes of the Blight, a walled haven from the dangers away to the north, and a refuge from the ill works of those who serve the Dark One. Or so it is said.

The city that greets Al’Lan Mandragoran, exiled king of Malkier and the finest swordsman of his generation, is instead one that is rife with rumour and the whisperings of Shadowspawn. Proof, should he have required it, that the Dark One grows powerful once more and that his minions are at work throughout the lands.

And yet it is within Canluum’s walls that Lan will meet a woman who will shape his destiny. Moiraine is a young and powerful Aes Sedai who has journeyed to the city in search of a bondsman. She requires aid in a desperate quest to prove the truth of a vague and largely discredited prophecy—one that speaks of a means to turn back the shadow, and of a child who may be the dragon reborn.

For the first time in a WoT reread, I found myself absolutely hating the content.

The only reason NEW SPRING didn’t get one-starred is b/c there are more than a few poignant Lan moments. But without those . . . *flares nostrils*

The first problem is that the front half to two-thirds of the book is slow as molasses.

Well, okay, something happens—Gitara, the same Aes Sedai who sent Tigraine to the Waste, foretells the Dragon’s rebirth then falls over dead, while Siuan and Moiraine are in attendance—then nothing happens.

They spend a bunch of time in Tar Valon, first doing clerical work, then forced into projects by higher-ranking Aes Sedai, and it’s 60% before Moiraine gets around to fleeing the Tower, but she’s so awful that I almost wished we were back in the Tower doing nothing.

You: How awful was she?

Me: Do you remember how bad she was the first few books? How manipulative? How superior?

Any temperance she’d learned, any restraint, is G-O-N-E. Combine that with her dual sense of entitlement (newly raised Sister + Cairhienin nobility) and you’ve got yourself a Moiraine. *throws her back*

She tortures Lan—premeditatedly and on a nightly basis—b/c not realizing he was in the company of an Aes Sedai, he said to a friend (while she eavesdropped) that he’d prefer to avoid their company. She abuses stray animals with flicks of the Power, and she leaves a shady innkeeper to be gang-raped, b/c it’s no less than the woman deserves (according to Herself).

Then there’s the Lady Edeyn, also known as Lan’s carneira.

“What’s a carneira?” you ask, and that’s an excellent question. It’s a manboy‘s first lover, but it’s ever so much more complicated than that.

In Malkier, men don’t approach women to show their interest. Women do the chasing. But b/c of the constraints on male behavior (b/c courtesy), it’d be pretty tricky for a man to spurn the advances of a woman he isn’t interested in without causing offense.

And if you think that’s bad, you’d better hold onto your hat, b/c this bitch wants Lan to marry HER DAUGHTER.

Ask me when she informs him of her little plan. Go ahead. Ask me.

When she’s manipulating him back into bed with her.

I could continue to rant, but really? What’s the point? Yeah, Siuan being a featherbrain and painting a red, flashing target over her head for the Black Ajah to see was aggravating, but it can’t compete with the misdeeds of others, so why bother?

Suffice it to say that I do NOT recommend NEW SPRING, in fact, I so absolutely do not recommend it that my recommendation is to skip it entirely. You don’t learn anything necessary to the continuation of the series, so do yourself a favor and toss this one on the burn pile. #goodriddance.