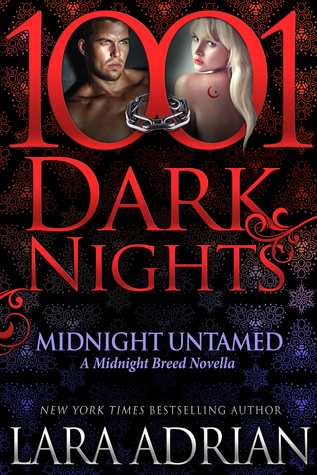 The mission was supposed to be simple. Infiltrate an enemy’s stronghold outside Rome and eliminate its leader. For a Breed warrior as lethal as Ettore Selvaggio, AKA “Savage”, stealth assassinations are only one of his many cold-hearted specialties. But the last thing Savage expects to find behind enemy lines—in his target’s bed—is a woman he once adored.

It’s been years since Savage last saw beautiful Arabella Genova. Years he’s strived to banish to his past, along with the fierce desire he once felt toward Bella . . . and the irresistible calling of her blood that stirs in him even now, despite the fact that she belongs to another male.

But when fate throws Savage and Bella together again in a race for their lives, will his long-lost love prove to be the one woman he can’t live without, or the perfect weapon to destroy him?

The latest entry into the 1001 Dark Nights books is a novella that is part of Lara Adrian’s Midnight Breed series. The Midnight Breed books are favorites of mine, although Adrian’s novellas have varying degrees of readability for me. Most I have really enjoyed, at least one I didn’t, and this one fell sort of in between. I enjoyed it, but it was not without a problem.

The Midnight Breed books are about a group of immortal vampire like warriors. There’s a whole lot of world building if you read the novels, but in the novellas, not so much. These warriors are the good guys, the ones you would call if something supernatural was threatening. And there is always a threat or a new villain, in this case a criminal group called, Opus Nosturm. In this story, warrior, Ettore Selvaggio, is sent to an enemy camp (or mansion, in this case) to take out a Breed male named Vito Massioni, a major drug dealer associated with the Opus Nostrum group, also known as the Breed’s biggest enemy now. While scouting the mansion in preparation to blowing it up, he sees a familiar face in one of the windows. Before he can carry out his mission, he has to be sure if it’s really her, the one woman he has never forgotten, Arabella Genova. Bella is a breedmate, one of the human women that can mate with a Breed male and live as long as he does, through the sharing of his blood. She was the sister of a friend of his, and he had fallen in love with her many years before. Things happen and he loses her forever, or so he thought. Seeing her, he knows he must rescue her.

This story ended up being a thriller of sorts. Since it is so short and a romance has to happen, it all goes very quickly. The trope here is star crossed lovers reunited, although with major problems before they can get their happily ever after. I liked the two main characters and thought they were worthy additions to the Breed novellas. There were just two or three peripheral characters in addition to the villain. And actually a broody, wounded Breed male is introduced later on in the story that I would bet will show up in another book or novella someday. If not, then I will be disappointed.

So, I did like the characters and the premise is very typical of one of these books-which I do enjoy. My problem came with the actual size of the novella. It starts at 13 percent in, and ends at 87 percent-which wouldn’t normally be a problem for me, but the whole thing is only 120 pages. This translates to very little actual story. I think there could be at least another thirty to forty pages or so, still be a novella, and tell a more involved story. I have had that problem in the past with these novellas. I wish they would give us enough of a story to warrant the price. Sorry, but I needed to mention this since it bothered me.

For Midnight Breed fans, in particular, I do heartily recommend this book. It’s a peek at more of our favorite warriors and their happily ever afters; just don’t expect a detailed, world building filled read. For people not familiar with this series, this book can standalone so don’t worry. I should also mention it’s an adult read due to sensual scenes.

Bottom line, I am glad I read it, but I am even more excited to read her latest full length book, Defy the Dawn, which I purchased recently.