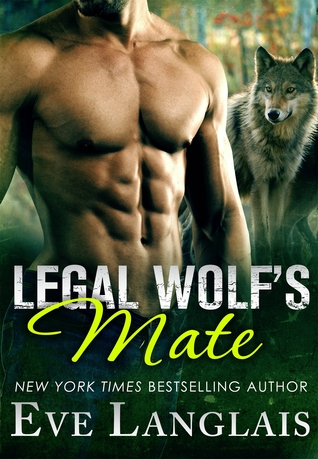 In Eve Langlais's Legal Wolf’s Mate—previously published in the anthology Growl— taking on a pro bono murder case isn't a problem for a lawyer who enjoys a challenge. Discovering his new client is his mate? A tad more complicated. Gavin has no intention of settling down, especially not with a woman accused of murder. But the beautiful, fiery Megan has his blood boiling and his heart racing, and it doesn't take Gavin long to know that his fate is sealed...

If you’ve been following my reviews for any length of time, then you know that I’m a HUGE fan of Eve Laglais. The way she writes her humor, she just gets me. It doesn’t matter what kind of paranormal her story is about, she can always make me laugh out loud. One thing I love most about her, is that she steps out of the box when it comes to her characters. She has been writing cyborg romances, alien romances and shifter romances for a long time now. A lot of her shifters are not the typical werewolf, she has swans, moose and caribou, just to name a few. This story however is about a werewolf. I know it sounds boring after that build up, but that’s one thing that is great about Eve, she can take typical characters and make them her own.

So, this story is about Megan, a secretary that has been accused of murder. Gavin is a hot-shot lawyer who was asked to take her case by a friend. He isn’t happy about it. He doesn’t lose and this case has a lot of evidence against her. However, when he goes to meet her, he instantly realizes that she is his mate. That gives him an even bigger investment in the outcome of this case.

It doesn’t take long for Gavin to realize that she has been framed. While all the evidence is pretty damning, he knows that she didn’t do this. There is also a question about who posted her bail, a whopping half-million dollars. She doesn’t have that kind of money as a secretary.

It does look like the crime boss who turned Gavin into a werewolf against his will (he wanted a lawyer, and there isn’t a better way to get one under your thumb is there??). It also looks like there is something that has to do with the crime boss and this murder too.

Megan plays meek well at times, but she is anything but. Gavin pushes her really hard for a relationship, but she is sure that would be a really bad idea because of the case. She wants to keep it professional. That gives Gavin a reason to get this case finished and soon.

This story is short. I would’ve liked for it to be a bit longer. The beginning is a lot of fun. It is full of some twists that were fun as we try to figure out who the real murderer is. I wasn’t a huge fan of the ending. There are some things that came out that I don’t think added as much to the story. Or, at least, the story should’ve been a bit longer to cover these additional details. That being said, this was a fun story. If you’re looking for something to cheer you up or something quick to fit in between reads, this is a fun story.

“Fine. I give up against your expert gagging. I’ll see her. What jail are they holding her in?”

“Funny thing you should ask. Someone posted her bail. Anonymously. A hefty half-million dollars. Know anyone with cash like that?”

That piece of dangling steak just got bigger. Fabian had that kind of money. The thought of tying him to a serious crime practically made Gavin wag his ass in delight. Good thing it remained planted in his chair. Wolves could get away with shaking their tail. Grown men in suits? Not so much.