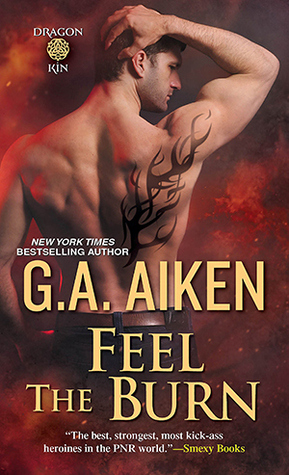 I, Gaius Domitus, one-eyed rebel dragon king of the Provinces, know that better than most, since I have to fight off half my ungrateful family on a regular basis to keep law and order here in my lands. But I never expected to have to consort with a barbarian human woman.

Kachka is beautiful, if you like them fierce—and of course I do. But she keeps complaining about how spoiled and decadent I am, and how a feared Daughter of the Steppes has no time for foolish dragons. I think she likes my eye patch, though. It is quite dashing. With death always at our tails, we take our passion like we take our allies. As they say, love the barbarian you’re with…

This is a favorite series of mine. I’m mean, first, you have DRAGONS. Second, it is full of humor and snark. If you’re not familiar with G.A. Aiken, she also writes under the name Shelly Laurenston, which is also hilarious. This series is a bit of a cross between fantasy and PNR. There is a new couple in each book, but it is full of a large cast of secondary characters. Some of these secondary characters have already found their match and others have yet to do so. We continue to follow these characters across and overarching story arc, which gives the book less of a romance and more of a straight fantasy series with some romance in it.

This story focuses Gaius Lucius Domitus, Iron dragon and the one-eyed Rebel King from the west who we met a few books ago when Annwyl the Bloody, the Mad Queen of the Southlands rescues his daughter and kills his uncle who had usurped his throne. We met Kachka Shestakova, formerly of the Black Bear Riders of the Midnight Mountains of Despair in the Far Reaches of the Steppes of the Outerplains in the previous book when she defended her sister from their mother and fled the Steppes and is now living with her sister in the Southlands.

As per usual with this series, there is some sort of mission. Gaius is out to hunt down and kill all of his family that supported his traitorous uncle. Kachka is sent on a mission by Annwyl to put a stop to a group that is terrorizing people not of their religion and setting temples on fire. Kachka goes back to the Outerplains to gather some people to help them on this mission. They come across Gaius in quite the predicament. When they help him out of this predicament. He stays with them.

We spend time with the “abominations”, Brigida the Most Foul, several of those crazy Cadwaladrs and more. Anytime the Cadwaladrs are involved, you know hilarity will ensue. Here though it was great to meet more of the Daughter of the Steppes. My favorite being Zoya. Her clan was a group of giants and they are extra happy. Pairing her with Kachka for their mission was so much fun.

One thing that I know bothers some people is the culture of the Outerplans. They will buy slave men to make them husbands. They have multiple husbands. They feel that men have no part in battles or battle strategy. They are only good for cooking, cleaning and taking out the trash, in the minds of the Daughters of the Steppes. Zoya really didn’t look at them as slaves, but as husbands. She was a mad look for men for her daughters. She even makes that argument.

This is a really fun series with dragons, humor, war, more dragons. This is a series you should really try. I’m very excited to hear what we have next in this series. Small side rant–I really wish authors would update their websites or have some social media presence or some way to keep readers up-to-date on their books. I have no idea when the next book in the series will be out. This book was published in November 2015, so it has only been a year, but no idea when the next book will be out.

I know these quotes are long, but I really wanted to share. 🙂

“I am so glad to see you, old friend!” Although they’d never been friends. Old or otherwise. “I thought for sure you were dead! I’m so glad you’re not! I’m so very happy!” Yes. That was the problem. The gods-damn good nature of the Kolesovas. There wasn’t one of that tribe who didn’t find something to smile about. Laugh about. Rejoice about. Every day. All the time.
But, outsiders often asked, despite their good nature, with their strength and size and the number in their tribe, still at least one of them could have become the Anne Atli. So, why had they not?
Simply put . . . because they had no desire to be. They were just happy to battle occasionally. Drink a lot. And fuck their many husbands. On a battlefield, they were a blessing. Any other time . . . a complete cheery pain in the ass.
Kachka fought her way out of Zoya’s smothering embrace and lied. “Glad to see you as well, old friend.”
Again, they had never been friends. But Kachka didn’t want Zoya to feel she had to prove how close friends they once were. That could be painful. Very, very painful.
“Why are you here?” Zoya asked, her voice still booming. “Returning to the Tribes, are you?”
“No, no. Just need a small team to help me on a—”
“I’ll come!” Zoya volunteered.
“No!” all five of them yelled.
“Ha-ha! You all make me laugh so! This will be such fun!”


“I know.” Kachka sighed. “She hugs, you know.”
Gaius laughed. “What?”
“She hugs. Who hugs?”
“I don’t know…. Everyone?”
“Not Riders. What is there to hug about? You hug your children, of course. When they are young and needy. You hug your horse, if it lets you. You do not hug each other. It is so weak.”
“It’s not weak. It’s affectionate.”
“Which is weak. Affectionate is for the weak. The strong do not need.”
They silently watched Zoya Kolesova dance by, a very large soldier in her arms. Since he didn’t seem to want to dance, she hugged him off the ground as she moved by.
“Zoya seems to like to hug.”
“The Kolesovas—”
“Have a use if you would just look beyond how annoying their good humor may be.”
“Is this kingly advice?” she asked.
“It is. The first thing my father taught me was how to use what you have access to. Nothing is worse than trying to force others into roles that do not fit them.”
“What role would you fit me in?”
Gaius didn’t hesitate. “Lord Executioner.”
Kachka nodded. “You are good.”