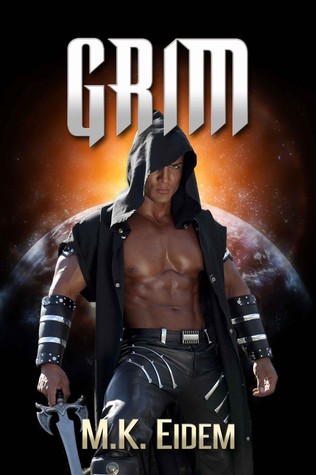 King Grim Vasteri is the strongest, most feared warrior in the Tornian Empire. He has been sent by his Emperor to find and retrieve compatible females for their dying civilization. Lisa is a widowed mother of two little girls who finds herself and her daughters suddenly in high demand. Will the most feared warrior in the Empire keep and protect them? Or will he allow another to claim them?

King Grim Vasteri is the strongest and most feared warrior in the Tornian Empire. He is the King of Luda, blood brother to the Emperor and his line will die with him. He will have no offspring for no female would join with him for once he was scarred he was considered 'unfit'. The Tornian Empire has been dying ever since the great infection caused the birth of females to become a rarity. Since then they have been searching the known universes for compatible females. The Emperor's discovery of a compatible female on a slave ship changed that. He'd ordered Grim to find his Empress' home world so more 'unprotected' females could be obtained, knowing Grim would never be allowed to Join with one.

Lisa Miller is a widowed mother of two little girls, Carly and Miki. Her husband died just a year ago, after a long battle with cancer and she misses him immensely. Friends want her to start dating again but in her heart, she knows there isn't a man on the planet she could love like her Mark. Who could love their girls like their own. Therefore, she'll stay alone.

When Lisa is discovered 'unprotected' at her husband's grave, she wakes on an alien ship heading for an alien world. Refusing to accept this she confronts the large males, demanding she be returned to her children. Seeing his chance to have a female, Grim agrees to accept and protect her offspring, if she agrees to Join with him and only him. Realizing this is the only way she can retrieve her children Lisa agrees and the Tornian Empire changes forever.


If you aren’t sure what a “squawk” is, start watching the YouTube video at 0:15:

That, my friends, is a squawk.

The reason for this squawk is b/c I’m scraping the bottom of the barrel. YES, I vehemently oppose anything that resembles reader-shaming, and I feel equally strongly about owning what you love . . .

The problem is that sometimes I deliberately read things I do not love. o.O

I’m typically better at it. I manage to read enough not-alien-smut that it’s not an issue—I know there are a lot of reviewers who MUST review every, single thing they read, but I’m not one of them. #cantstopwontstopreading

I write reviews when I have something to say, so if a book is MEH, I (might) leave it at that.

BUT. Life is life, and last week I ran around cleaning my house like a crazy person, b/c impromptu visit from my dad, and I was pretty much elsewhere for the entirety of October (but hubs was home), so there was a LOT that needed cleaning.

It was stressful. I was full of stress.

Also, I watched Lin-Manuel Miranda and co. sing the opening number from Hamilton over and over again, but that’s neither here nor there. I only mention it b/c THERE’S MORE TO ME THAN MY WEIRD FIXATION WITH ALIEN SMUT. *wails*

Actually, the main reason I caved and decided to sort of review GRIM, is b/c damn everybody (who also reads alien smut) seems to love it.

1. The editing was truly awful.

Even for an indie. The content wasn’t bad, but the grammar and syntax . . . Ye gods.

It got better as the series continued (b/c, YES, kept reading, b/c weird alien comfort food), but even by book 3, the woman still hadn’t figured out that proper nouns are meant to be separated from the rest of the sentence with a comma (or two).

And for the record, it’s about as deep and profound as it is feminist.

Mars Tornian needs women, b/c 500 years ago, their ruler offended their goddess, so she she cursed them all into being unable to regularly birth females, and their current population is now a 200:1, male to female ratio.

A human female was rescued from another species—the Bad Guys—and, hot dog, it seems she’s breedable with the HAWT alien warrior god (figuratively, not literally) she immediately hooked up with.

Now all the boy aliens want one.

Only Earth females are completely better different than Tornian females. Tornian females are gold diggers who only stay with a male until he breaks the bank in his efforts to keep her, then she moves on to her next sugar daddy, leaving behind any offspring that resulted from the union.

Earth females love their offspring and are horrified by the Tornian female lifestyle. And some of them can’t help but begin to care for these perfect male specimens, b/c really, they’re just unloved little boys, right?

I’ll admit that in hindsight I can see possibilities, but the execution was so heavy-handed that anything meant to be thought-provoking was lost in the lack of subtlety.

Beyond that, it was business as usual: well-hello-seven-foot-tall-hunk-of-manflesh-oh-look-at-that-we-just-met-but-already-we’re-procreating-YAY, misunderstandings, conflict due to cultural differences, but-we-find-a-way-to-make-it-work-b/c-we-all-secretly-want-romanticized-VIKING BARBARIANS-in-our-beds-OMG-I-LOVE-ALIENS.

And they all live HEA.

I can’t explain the fixation, but there’s no denying that it exists, and if you share the fascination, you can do much worse than GRIM. Just be aware of what you’re in for (tropes on top of clichés of top of hideous grammar). But who cares? B/c aliens, I love ’em. *shrugs awkwardly*