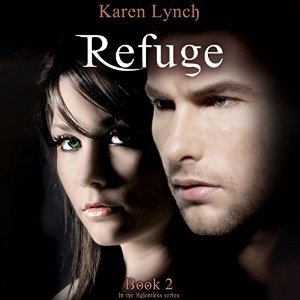 To keep the people she loves safe, Sara left everything she knew behind. She soon learns this new world is nothing like her old one, and she struggles to make a place for herself among the Mohiri. But it soon becomes apparent to Sara and to everyone one around her that she is not your typical warrior.

As the weeks pass, Sara builds new relationships, copes with her new trainers, and tries to manage her ever-changing powers, while keeping her unique heritage a secret. Looming in the background is the constant shadow of the Master who will do anything to find her.

Sara finds herself on a journey of self-discovery that uncovers her true strengths and awakens a part of her she never knew existed. She experiences the delight of new friendships, the sweetness and pain of first love, and a loss so deep it could be the thing that finally breaks her. At the end of it all, she discovers that the one place she was supposed to be safe might not be the refuge she thought it was.

Relentless, the first book in this series, was a total surprise to me in how well written and plotted it was. I was unaware of these books and the author, but I ended up being very happy I had found this series. With this second book, Lynch has cemented my faith in how good this series actually is, and I plan on reading/listening to all of them. And truthfully, I am actually listening to the third as I write this review. It’s urban fantasy and at this point still YA. Keep in mind if you haven’t read the first one yet that there may be some spoilers coming up in this review.

Sara is now living in the middle of nowhere in a Mohiri military stronghold. She has left her Uncle Nate back home in Maine, and only a few people are aware of where she is.The Master(vampire)is still out there searching for Sara and it’s no longer safe in Maine for her.She’s now training with Mohiri warriors to be able to fight vampires. She’s still growing into her fae powers, as well as trying to learn how to control her Mori(demon)that lives within her. Nikolas is still causing havoc to her pulse, as in she reacts to him differently than to anyone else. She is still denying her connection to him, until she can’t anymore. Sara also makes friends with other trainees, Jordan in particular. She also befriends an ill Mohiri warrior named Desmond, a recluse that doesn’t talk to anyone other than Tristan, until Sara. Tristan is the leader of the stronghold and has a connection to Sara as well. Her best friends, brothers(and supernatural creatures) Roland and Peter, also take part in this one.

As with the first book, I couldn’t stop listening. Living in a refuge doesn’t sound all that exciting, but I promise you it is. They manage to come up against demons, and of course vampires. Sara is still just as feisty and snarky as she was in Relentless and there is definitely something to be said for that in a heroine. She has powers she still has no idea how to use, and she even starts getting to know her own demon. I loved her relationship with Nikolas, talk about a slow burn! The attraction is more than mutual and with this book, there’s finally some progress made.

Narrator Caitlin Greer was again a wonderful narrator. I think she is why I decided to listen to all of these as she is a good voice for Sara. And actually she does well with all of the voices, at least I thought so. The only problem I did have with her narration was how fast she talks at times. That is just a small problem and I wouldn’t worry too much about that. I did notice that the fourth book, Warrior, isn’t on audiobook yet, so I am hoping that it will be soon.

As with Relentless, this book was full of exciting moments-both life and death-and romantic ones. Since this is urban fantasy, there’s way more of the life and death kind, although I am hoping for more of the romance with the next book. On purpose I have not mentioned much of what happens and I think you will find that to be a good thing. Suffice it to say that I enjoyed all the characters, as well as the monsters. I found it to be an extremely engaging story line and listen for me and I again highly recommend this to urban fantasy, as well as paranormal romance fans-older YA or adult.