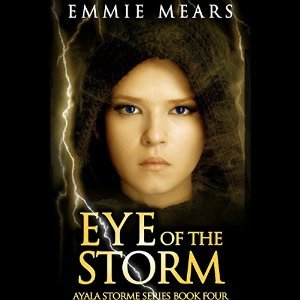 Earth teeters on the edge of a razor-sharp blade.

With the Summit on barely unified tenterhooks and hellkin bubbling into Earth with no sun to stop them, Ayala Storme has her hard-won family, an uncertain new love, and a team of allies - half of who have betrayed her in the past. When the cities of North America begin to fall to demon hordes, Ayala has to fight her way back into Nashville in a desperate hope to save her city.

With the witches trying to find the original source of the imbalance that allows hellkin a tie to Earth and the Mediators ready to draw their swords every time they see a shade, time is ticking away. The witches are working as fast as they can, but what they find may shake the foundations of everything Ayala has ever known - and the answers needed to salvage what's left of Earth may lie only beyond Earth itself, in the sixth hell.

The battles are over. It's time for the war.


The Ayala Storme series has become a favorite of mine, and always without fail, draws me in and doesn’t let go until the last page. This latest entry by author Emmie Mears was certainly up to that task, and succeeded admirably!

By now all the characters are like old friends. The world they inhabit is just barely recognizable and that’s because the earth has become a place infested by demons of all sorts. Whole states have fallen by the wayside and are now uninhabitable. Ayala Storme is a demon hunter extraordinaire. She has fought to save Nashville until she becomes a small part of what she actually hunts. Now carrying demon DNA (of sorts)inside her and leading a group of human-like demons called Shades, she still fights for humanity. And humanity? Well, they are not sure of her allegiances for the first time. And that includes many of her fellow hunters. So now she is being hunted by both the demons and her fellow hunters. Holed up in the boonies of Kentucky, she realizes she must go back to Nashville to face everything that is hunting her. But maybe it’s too late? Because things are moving fast for the demons and state after state is falling to them.

Ayala is one of my newer favorite fictional heroines now. She is fearless as the day is long, loyal to humanity in the same way, and just an all around kick ass demon hunter. She is an extremely well drawn character, the kind you would definitely want in your corner in any situation. She cares deeply for her friends and that includes the demon shades that follow her. She is in the beginning stages of falling for her best friend, Mira. Her ex-lover from earlier in the series, Mason, is also living in Kentucky with her, along with her brother, Evis. A new character, a heavily pregnant witch named Asher is introduced early on in this book. She’s very interesting, to say the least, and very vital to the story. Of course, Nana, the bunny is also back. Every time I read one of these, I end up wanting a bunny.

This was the last book in the series and I will honestly miss it. This series has really been a perfect urban fantasy and one that I will continue to recommend to anyone that will listen to me. Any romance in this takes a back seat to all the action and yes, even mystery involved in the story. There’s a mega amount of violence and edge of your seat scenes throughout this book and the whole series. This time that all got ramped up to truly finish out this series the perfect way. Good versus Evil and who’s going to win, and all that. Because of spoilers, I chose not to tell that much about the actual story for this installment.

I listened instead of read this one. It was the first time I had listened to one from this series, and I did enjoy it. Amber Benson (from Buffy fame) is the narrator and I will be honest, it took awhile for me to get used to the voice she uses for Ayala. But, not too far in I realized that it was pretty perfect for Ayala’s personality, so I ended up being very happy with the narration. Ayala was born and raised in the Nashville area, and her accent reflected that. Other voices are also done well. Ms. Benson’s acting chops really came in handy for this read!

I loved every book in this series, and none were a disappointment to me. As I said previously, I highly recommend this whole series because of the wonderful characters, the horrible villains (both human and demon), the deftly plotted writing, and for the flat out good time of a wild ride to the end. Must read for dark urban fantasy fans!