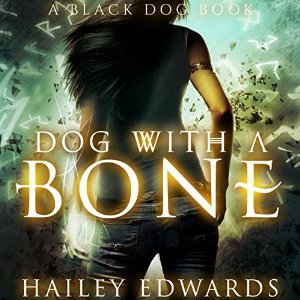 Half-bloods with Thierry's skill set are given two options. They can join the conclave's marshal program, or they can pack their bags. Turn down the job offer, and you've just shredded your residency pass for the mortal realm and booked yourself a one-way ticket to Faerie.

Texas is the only home Thierry has ever known, and she's not going anywhere - even if it means following in her notorious father's footsteps as a peacekeeper. But pinning on the badge opens her eyes to the fact sometimes fae need protection, too, and that sometimes humans are the real monsters.

This series was recommended to me by a number of Urban Fantasy aficionados, so when the first audiobook went on sale for $1.99, I decided that now was the time to start Hailey Edwards’ BLACK DOG novels. I was drawn to DOG WITH A BONE because of its short length, Fae inspired story line, and I liked Nicole Phillips’ sample sound clip, although it should be noted that this is the only volume that’s available in this format, the other three installments are currently read-only.

Thierry’s voice as the MC was on par with this genre however, it did come to my attention that she is only eighteen, and for the most part that wasn’t a turn-off as her character didn’t display any of the usual New Adult tendencies. The only niggle was when it came to her relationship with Shaw—her instructor turned partner. The age gap left me feeling a little uneasy about their romance, especially considering that he’s an authority figure AND an incubus. I couldn’t help but question whether the basis of their love was genuine or coerced.

Nicole Phillips’ girlish tone was an appropriate fit for Edwards’ heroine, albeit without a second installment to back-up her performance, it’s difficult to say whether I would have enjoyed listening to her long-term. Otherwise, I liked her interpretation of the action sequences, and even though there wasn’t a whole lot of world-building in this book, the protagonist didn’t similarly suffer. Thierry has a lot to prove with an absentee father, avoidist mother, and unpredictable powers. I look forward to her showing us what she’s got in HEIR OF THE DOG.

DOG WITH A BONE was an all right listen for the price.

4 responses to “Audiobook Review: Dog with a Bone by Hailey Edwards (@HaileyEdwards, @audible_com)”