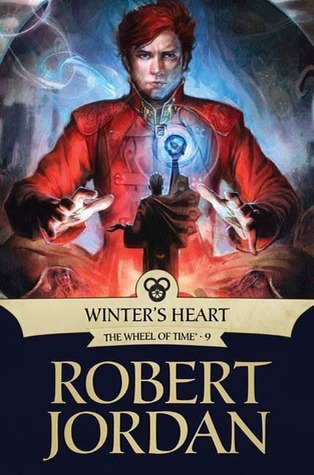 Rand is on the run with Min, and in Cairhein, Cadsuane is trying to figure out where he is headed. Rand's destination is, in fact, one she has never considered.

Mazrim Taim, leader of the Black Tower, is revealed to be a liar. But what is he up to?

Faile, with the Aiel Maidens, Bain and Chiad, and her companions, Queen Alliandre and Morgase, is prisoner of Savanna's sept.

Perrin is desperately searching for Faile. With Elyas Machera, Berelain, the Prophet and a very mixed "army" of disparate forces, he is moving through country rife with bandits and roving Seanchan. The Forsaken are ever more present, and united, and the man called Slayer stalks Tel'aran'rhiod and the wolfdream.

In Ebou Dar, the Seanchan princess known as Daughter of the Nine Moons arrives--and Mat, who had been recuperating in the Tarasin Palace, is introduced to her. Will the marriage that has been foretold come about?

There are neither beginnings or endings to the turning of the Wheel of Time. But it is a beginning...


There will be SPOILERS. I figure at this point in the series, the only people intelligently reading my reviews are fellow WoT veterans, so I’m not going to sweat the small stuff. I’ll still spoiler tag any Game Changers, so if you are a first timer, fear not. BUT. If you prefer to be blind for a new (to you) installment, away with you. /with love.

For some reason, I got it into my head that this was the dreaded installment in which absolutely NOTHING worth mentioning happens, so I was pleasantly surprised, b/c no, it’s not . . .

That would be the next one. *sighs*

WINTER’S HEART, however, runneth over with awesome, but before I get into that, I need to tell you that I LISTENED to the first half of the book on my way to and from my sister’s wedding.

This is important b/c it’s really fraking weird to switch from reading to listening to high fantasy. I mean, WHUH. I did well enough with the main characters (b/c OCD and had long since looked up the correct pronunciations in the glossary), but the multitude of secondaries, especially the individuals in the various Aes Sedai factions . . . O_____O

Then there were all the regular words that I was shocked to discover I’d been saying incorrectly for, oh, I don’t know, TWENTY YEARS.

For example, did you know that dais is a TWO syllable word that is pronounced [day-us]. Or that swathed is meant to be [swaythed]?

B/c I did not. *kicks aluminum can*

Then I got home and read the second half way faster than I could’ve listened.

I think this is the fifth time I’ve read #9, so it’s old hat to me, but I do remember thinking, “how in the blood and bloody ashes do Aiel become first-sisters?”

You either are or you aren’t. Right?

You and your bestie can choose to become first-sisters (the equivalent of full-blooded siblings) by participating in a ceremony with Wise Ones. A ceremony in which you first compliment then insult said bestie, before hauling off and smacking the shit out of them—TWICE—and if after all of that you still want to be sisters for real, the Wise Ones use the One Power to simulate you and your soon-to-be sister’s labor and birth.

But as weird as the whole birthing thing was, what came before it—the sharing what you thought to be each others greatest strength and weaknesses—was surprisingly affecting.

Maybe it was b/c I was listening instead of reading . . . but I cried. There. I said it. I bawled like the friggin’ infants Aviendha and Elayne had believed themselves to be.

We’ve known all along that these three otherwise intelligent women (Elayne excepted, b/c HATE) are meant to share all that is the Dragon Reborn (*rolls eyes*), so bonding themselves to him was kind of inevitable.

Then there’s View Spoiler »Elayne’s ill-timed pregnancy, « Hide Spoiler which is just one more reason to loathe her, b/c irresponsible and self-indulgent and I HATE HER.

In that same vein, how stressful is it that View Spoiler »Aviendha will at some point carry FOUR of Rand’s children AT THE SAME TIME, and while they’ll be healthy, Min saw “something odd” about them? « Hide Spoiler *edvard munch face*

3. Demandred/Taim—same or not the same?

NOT the same, as it turns out:

“Kill him,” Demandred had commanded later, but he had added that it would be better they died than let themselves be discovered again. By anyone, even the M’Hael, as if he did not know of Taim’s order.

By itself, Kisman’s ruminations weren’t enough to cinch it for me. Forsaken are tricksy, and it could’ve been a ploy to throw others off the scent.

But there’s also this:

Abruptly the old man stopped and thrust out his hand straight toward Demandred, and Demandred found himself frantically fending off a net of saidin that struck his warding much harder than it should have, as hard as his own spinning would. That tottering old man was an Asha’man!

No way could Demandred be masquerading at Mazrim Taim and not recognize Damer-effing-Flinn.

So who the bloody hell is he? *flares nostrils*

Not much to say about that beyond it’s BAD.

5. and 6. are too big to not be completely spoiler tagged, so:

View Spoiler »Rand cleansed saidin and Mat FINALLY found out that Tuon is the Daughter of the Nine Moons. « Hide Spoiler

Both of which are HUGE and cause for celebration. *throws confetti in the air*

1. What did Verin do to get banned from Far Madding?

3. Seriously, what is the deal with Isam/Luc? Dude is FREAKY. I mean, we found out he was the one who killed the Black Sisters in the Stone AND the Gray Man in the White Tower, and we learned this immediately after his failed attempt to kill Lan and Nynaeve . . . His failed attempt where he materialized into the room . . . from Tel’aran’rhiod?

Is that the deal? He is become what all the don’t-enter/leave-the-world-of-dreams-while-awake warnings are about?

Whatever. He/They gives me the CREEPS.

So you know how Loial is always talking about putting “too long a handle” on his axe? How about all the times various Ogier have knowingly said the price of violence was too high?

And another contingent of the Guards had taken up residence in the city, too, Ogier, of all things, in the red-and-black. Sometimes they patrolled with the others, and sometimes they wandered about with their long-handled axes on their shoulders.

Are the Gardeners of what they speak? Did they sail away with Hawkwing and never return? Did they survive away from the stedding b/c they lost some essential part of themselves?

5. Is Egeanin’s mother still alive? B/c Hand of the Empress (may she live forever) at Sea sounds like kind of a Big Deal.

And that’s the whole of it. Obviously, I love this series and I think you should read it.

One response to “Review: Winter’s Heart by Robert Jordan”